Summer stirs up a controversial new work over at Single Carrot Theatre in Baltimore as they present P.O. Box Unabomber, a new work by Zdrava Kamenova and Gergana Dimitrova. Presented in conjunction with 36 Monkeys and Directed by Dimitrova, this international collaboration is a fusion of text-based performance art that touches on Ted Kaczynski, also known as the Unabomber, the space elevator and the corruption of technology in the modern world. A cleverly written, rapid-paced piece of intense work that leaves you pondering many things before the show is over, this is a perfect fit for Single Carrot’s mission statement.

Authors Kamenova and Dimitrova bring several elements into focus in their work; mainly the notions of Kaczynski and his manifesto— focusing heavily on the way technology rather than advancing the human race seems to be corrupting it. Played as a parallel against the destructive progression of technology is the journey of the now extinct Western Long-Beaked Echidna and its attempt to find it a mate like itself to prevent disappearing forever. The strong thematic ties between the two; man thinking he can disappear despite always being watched by satellites, and the creature thinking it will never disappear, despite being the last of its kind, are deeply thought provoking.

Director Dimitrova delivers an intense pacing of the production. The moments of text that focus around the Unabomber, and individuals related to his story move in sharp rhythmic pulses, jagged and hurried. These scenes are punctuated by the languid serenity of ‘letters’ sent from the Western Long-Beaked Echidna, filled with hope and optimism. What is truly incredible is that the tale of the Echidna cries out to something deeper than just the animal’s plight personified, echoing remnants of the innate human desire to survive and be with others.

Costume Designer Elena Shopova shows the audience in a harrowing selection of unified outfits that the Unabomber is, in a sense, Everyman. Or better yet that inside Everyman lies the potential for destruction in today’s ever-evolving society. The same can be said of the hopeful egg-laying mammal, though her costume is unique from the other three performers. Shopova, working with Video Designer Riki Kim, creates a series of projections that blur the lines of reality in this production, keeping the audience’s visual senses stimulated while the text continuously pumps throughout the show.

Another striking element of this production is the live music that underscores each scene. Composed and performed by Jeremy Durkin, there is a juxtaposition of hard and soft in the piece; sharp electric guitar that charges the moments when the ‘Unabomber’ is featured, versus gentle acoustic strumming that underlies each of the Echidna’s letters.

Taking on the role of the ‘Echidna’ is Jessica Garrett. At first Garrett appears dreamy and bright, her enthusiasm, though mild, is a shining beacon of hope for her journey. Every reappearance thereafter shows her losing a little bit of that spark as she travels and journeys, her spirit weary, her bright sense of hope slowly dashed by reality. The character makes a slow devolution into darkness and despair; dismay filling her once cheerful existence. Garrett’s versatility keeps the audience on their toes and captivated by her story; quite the twist amid everything else that happens.

Along with Garret is Katelin McMullin, playing the wife of the man in question. McMullin has a tenacity about her stage presence, particularly when breaking into the confusing emotional outbursts that are inlaid into several of her speeches. Reading her text, as all the performers in this production do, from an oversized screen that hangs above the audience, McMullin gives her words a passionate life, some more subtle than others.

Paul Diem and Nathan A. Cooper take turns being the focal point at the microphones. Diem darts into a hidden alcove to read quotes published by Kaczynski in the Post, barking them through a megaphone to further solidify their harsh nature. Cooper, with a sharp flip of his hat from backwards to forwards, adapts the role of the man’s son, with eager intents and an insatiable curiosity.
The production may move along in such a way that makes it difficult to follow but it is an extremely unique story; well worth perusing, and it will certainly give you a great deal to think about. 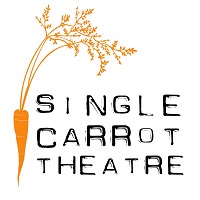