If you were unable to participate in the “Magic to Do” that The Theatre Lab had percolated during this weekend’s four performances of Pippin, then you missed the opportunity to witness a superb production of some wonderfully talented teens. The young group of performers had only 3½ weeks of rehearsals, but you would never had known from watching this entertaining production. As I sat in the audience and marveled at the acting and vocal skills, I considered myself fortunate to have been given the opportunity to review my first “Extraordinary” Theatre Lab production, passionately directed by Caroline Angell.

With music and lyrics by Stephen Schwartz, Pippin premiered on Broadway on October 23, 1972, and the show is still produced throughout the world because its lyrics and themes are timeless. As Director Caroline Angell shared in her Director notes – “Working on this show, in this place, with teens who are no doubt grappling with their own version of these events is a profound one.”

The set consisted of a room with high cathedral ceilings and a balcony on the second floor surrounded by an oak banister, a raised stage on the first floor, a movable dolly utilized in many scenes for various purposes and two ladders on either side of the venue providing balcony access. As you walked to your seats, you noticed that the dolly and ladders were covered by blankets. When the show opened with “Magic to Do,” actors appeared on the stage and ripped off these blankets to unveil more actors hidden underneath. With 26 members in the cast, the exciting opening number, choreographed by Ryan Patrick Welsh, included somersaults and acrobatics, and grabbed the audience’s attention from the get-go.

In a later scene, Welsh utilized jump ropes, jumping jacks, and hula hoops A screen was strategically placed towards the back of the stage utilizing lighting which produced simulated silhouette shadows. These special effects were incorporated into various musical numbers to enhance the plot. One scene showed Pippin in bed with Catherine as they attempted cohabitation for the first time. The two actors were under a sheet while the silhouette shadows behind them were shadowing success or failure under the covers. Lighting Designer Marianne Meadow had a major hand in making these fascinating backdrop scenes so realistic.

Richard Hall portrayed Charlemagne’s son Pippin, who was on stage for the majority of the production. As a graduate of the Theatre Lab, Hall is now a University of Maryland student. He was invited back to perform the role of Pippin as a “guest artist.” He wore black leather pants, a white shirt, and a red vest giving him a sense of authority, but as Pippin says more than once throughout the performance – he still felt “empty and vacant.” Even though Pippin is a challenging role, Hall achieved the believability factor through both his actions and words. Be it a stern look of rebuke, a portrayal of complete failure, or sublime happiness, Hall convincingly portrayed Pippin’s roller coaster world. And his renditions of “Corner of the Sky,” “With You,” and “Extraordinary” were beautifully sung.

Barbara Peisch was superb as The Leading Player (or narrator). Besides providing running commentary and detailing the storyline, her strong and sensitive voice filled the stage during her renditions of “Simple Joys” and “On the Right Track.”

In a twist of casting, Pippin’s father, Charlemagne, was played by a female – the talented Ayanna Bakari, who gave an admirable royal performance. Her renditions of “Welcome Home” and “War is Science” with Hall were wonderful.

Charlotte Torres, as Pippin’s Grandmother Berthe, stole the show while encouraging the audience to join her in the singing of “No Time at All,” as a huge placard with the song’s chorus lyrics rolled onto the stage. Torres was endearing as she assertively told the audience, “I have 3 more verses which are mine, but feel free to sing the chorus”.

Pippin’s arch rival for their father’s throne – brother Lewis (James Woods) and Lewis’ evil mother Fastrada (Cara Bachman) convincingly portrayed these scrupulous characters who are committed to asserting Lewis’s right to be Charlemagne’s replacement rather than Pippin. Their duet “Spread a Little Sunshine” is a hoot as they climbed down the ladders on opposite sides of the room and met center stage at the song’s end.

Catherine (Sesha Kammula) was given the task to play the conniving widow who is trying to entrap her love Pippin into matrimony. She fully captured the widow role with her daughter Theo (Emma Sophie Moore) when she sings her romantic and heart-warming love songs “And There He Was” and “Kind of Woman.” 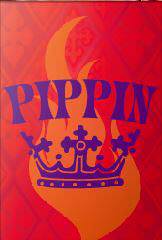 There are two authorized endings for the show. Today’s version used the newer approved ending which I have never seen before. This version is also used in the current Broadway revival of Pippin, which took home this year’s Tony Award for Best Revival of a Musical.

The Theatre Lab’s production of Pippin was filled with so many magical moments. It’s one of the best productions of Pippin I have ever seen!