William Shakespeare, the behemoth of the literary world. Twelve Dramas, sixteen Comedies, ten Histories – a total of thirty-seven full-length plays. Is it possible to touch on all of them in an hour and a half?

The answer is “Yes!” if you are the Silver Spring Stage.

The Complete Works of William Shakespeare (Abridged) (‘Complete Works’) at Silver Spring Stage does just this feat, in one of the funniest, snarkiest, and rousing interpretation of the Bard’s masterpieces to be seen on the stage in the DC/MD/VA area.

Complete Works is originally a three-man play written by Adam Long, Daniel Singer, and Jess Winfield, original founding members of The Reduced Shakespeare Company, an acting troupe famous for its fast-paced and humorous performances of real-world works and topics.

In a completely unique setup, Complete Works has a small cast of only three actors, who play themselves: Steven Snapp (Steve), Jennifer Osborn (JenO), and Andrew Greenleaf (Andy), who switch into numerous roles in every scene. The play breaks all aspects of the fourth wall, with the three actors talking to, interacting, inviting onstage, and even lap-sitting on audience members in the small and casual, but personal, theater.

The play starts with JenO, Steve, and Andy lauding the genius and greatness of the Bard, a heavy tome if his complete works in hand, and roguishly betting the audience that they can cover every play written in the Shakespeare’s name in an hour and a half. The actors are dressed in large, old-English style blouses and poofy shorts-pants, contrasted with neon stockings and bright Converse sneakers, a strange and comical getup from the creative mind of Costume Designer Stacey Thomann. The trio wonder, “Well, which work of the 37 plays do we begin with?”

The answer is, of course, the most famous – Romeo and Juliet. A quick costume change has Steve entering stage left in a doublet jacket and ridiculous blonde wig as a lovestruck Romeo, whilst the hilarious Andy runs out as an oafish Juliet complete with a tacky pink-blue apron dress and yellow wig, with JenO playing various supporting roles. The trio runs around parodying the drama of the plot and star-crossed lovers, while, most impressively – considering all of the movement, energy, and entirely new context of the parody – vocalizing Shakespeare’s words to the tee.

The trio play on each other’s strengths and characteristics effectively: a sassy and confident JenO, a nervous Steve who is oddly reminiscent of Inspector Jacques Clouseau from Pink Panther, and the just-plain-silly Andy, who has the best costumes and slapstick moments of the bunch. After R&J, the trio continues to parody play by play, sometimes lumping together various plays to make a point. They go so far as to use entirely strange, but actually surprisingly metaphorically accurate, antics to metaphor some of the plays, with an on-stage cooking show, a football game, and a gangster-rap. In some sections, they interact with audience members (advice: don’t sit in the front row if you don’t like attention!), and even bring a few onstage as helper actors in the portion on Hamlet. Director William T. (Todd) Fleming spices up the original script by sprinkling in references that connect with the audience specifically, including Maryland and modern events, keeping the audience attuned to the fact that the play is unique in both subject matter and presentation.

Despite the silliness of everything and a modern spin, Complete Works is still very much “Shakespeare.. It pokes fun at the high drama and recycling of plots of Shakespeare’s plays, but not to make fun with malice at the body of the work. No, in fact, quite the opposite – in it’s own way, Complete Works is an homage to the ingeniousness and prolificity of the Bard, as evidenced by weaving his most famous and meaning lines throughout play.

The Complete Works of William Shakespeare (Abridged) is rib-crackingly funny, and the most laughs I’ve had in ages. Though not infallible, it’s fun, lighthearted, and doesn’t take itself too seriously (or seriously at all). The combination of the energy, jokes, acting chops of the cast, and one-of-a-kind audience integration makes for one of the most enjoyable comedic evening you can treat yourself to this month. Shakespeare scholars to Shakespeare ignoramuses will just love Silver Spring Stage’s rendition of The Complete Works of William Shakespeare (Abridged).

The Complete Works of William Shakespeare (Abridged) at Silver Spring Stage plays through February 1, 2014 at the Silver Spring Stage Theater – 10145 Colesville Road, in Silver Spring, MD. To purchase tickets, please call (301) 593-6036, or order them online, or visit the box office approximately one hour before scheduled performances. 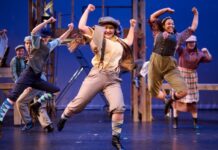 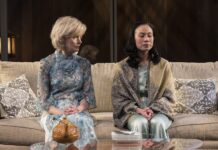