P.T. Barnum was right. There’s a sucker born every minute, and Perfect Liars Club is out to prove it. In 90 minutes of fun-filled storytelling and audience participation, the Perfect Liars Club’s Thursday evening show at the Goethe Institut played to a full house of would-be sleuths out to have a good time. There’s a simple plot: four people take the mic and tell unscripted stories about life stuff that supposedly actually happened to them. Three are telling the whole truth and nothing but the truth. One is the liar. Your job is to “listen, laugh, interrogate and vote” for who you think is up there having a great time fabricating the whole thing. 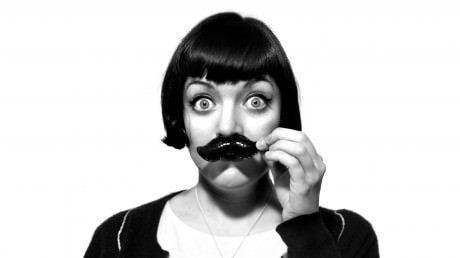 Layla McCay is the moderator and creative mind behind Perfect Liars Club which first debuted in May 2013 to a sold-out show. She gives the audience instructions on how to play the sniffing game and introduces each storyteller  while adding delightful commentary and witty repartee in a charming Scottish brogue. It was worth the price of admission just to hear Layla’s accent. She originally hails from Scotland so the brogue was real!

McCay has a passion for this production that’s palpable and her own enthusiasm for the show helps to carry it and make it as delightful as she is. You can tell that Perfect Liars Club is her baby cub and she’s its Mama Bear.

The format for the show is that four people tell a different story at every performance. The cast changes at each show along with the stories. On opening night, Cara Foran,  Pedro Alcocer, Kevin Boggs and Pierce McManus were at the mic. The intimate ambience of the Main Stage of the Goethe Institut lends itself well to a night of storytelling and draws you into its fun mood in a drawing room parlor kind of way. The only staging was a spotlight and a floor-level standing microphone in front of a lovely curtained stage.

If you love audience interactive theater, you will certainly enjoy yourself at Perfect Liars Club. It’s an evening of lively interchange where you get to hear four somewhat zany stories, shout out your interrogating questions to the storytellers to find out where the lying holes are; and then group vote on who is the perfect liar.

The stories on opening night had Cara Foran telling us about her perilous tour through a lion’s park in Arusha, Kenya; Kevin Boggs about the night he saw Elvis at a concert outside his hometown of Jonesboro, Tennessee when he was a little kid; Pedro Alcocer relating his botched computer save that led to the loss of important research data for a group of PHD candidates at the University of Maryland ; and Pierce McManus taking us back to his prom night 25 years ago in upstate New York when he was a young cad pulled over for public urination after an evening of youthful drinking. And we had to spot the liar.

It was fun to see how you have to listen carefully to catch a lie.  Otherwise, it all sounds perfectly true. The devil really is in the details and at this show you’ll have a great time lasering  your attention to try to decipher the liar. After questioning the storytellers in call-and-response fashion, we did a hand vote to ferret out the fabricator. Washingtonians proved not to be as shrewd and as worldly as we think we are. The storyteller with the fewest votes and thus the one deemed most likely to be telling the truth, turned out to be the perfect liar! We got hoodwinked by Pierce McManus’ bamboozling charm, confidence, and rowdy capacity to just make it up as he went along. Prizes were awarded to those who smelled the rat.

It might improve the show, however, if the producers make sure that all of the stories are interesting and can hold an audience’s attention. Pedro Alcocer’s tale about the botched research lab fiasco, in particular, made you think he couldn’t possibly be the liar because his yawn-stifling yarn was too boring to be a fib!

Perfect Liars Club has a life and a following of its own that includes a website www.perfectliarsclub.com, a blog, and first Monday open mic nights at local venues where any veracity-challenged volunteer can get up and tell a story. It’s been billed as a sellout underground DC event. Check it out to see whether that’s true or not.

Perfect Liars Club plays through July 20 at the Goethe Institut – 812 7th  Street N.W., in Washington, DC. For performance information and to purchase tickets, go to their Capital Fringe Page.