Do You See What I See? Opens with 9 actors sitting in a semi-circle. the recognizable trademark for group therapy. In this case referred to a “comic therapy,” where the audience is introduced to each of the 6 lead comics. The circle is a would-be awesome tool to bring each of the comedy stories together. Unfortunately, after the opening it goes away and we never see it again, leaving each story to stand on it’s own. Luckily many of them do. 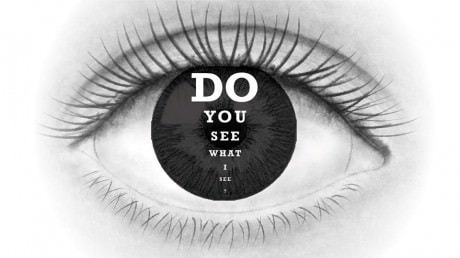 The show stuck to a pretty simple formula. Each comic did a short bit of stand up, which was then acted out by members of the cast. Some of the best bits were from TJ Spaulding whose style is just exactly the right amount of dry. She gives us a glimpse at dating through the ages, and finds away to make gentrification hilarious. Meanwhile, Alex Starr does a mean impression of Liam Neeson, and defends Paula Deen as master of fried chicken.

The introduction touts improv as part of the show, which there wasn’t much of, but for the most part the sketches made up for this. Even as a few fall flat, such as a bit about picking up a prostitute, the bulk of skits, like dating a panda (panda costume included) had the audience giggling with laughter. The acting skills of Jeremy McDougal and Matt Dundas helped support the funny in the scenes and pull together some of the clunkier bits. Overall, Do You See What I See? had the audience engaged and laughing, and would make a nice end-of-the-night follow to a serious drama; consider this when your making your fringe schedule.

Do You See What I See? plays through July 26, 2014 at Warehouse Theatre–645 New York Ave NW, in Washington DC. For performance information and to purchase tickets, go to their Capital Fringe Website