This Special Edition of The Playwright’s Playground introduces The Playmaker Series: CATF 2014. In a series of in depth conversations, I speak with the artistic teams associated with the the plays at this year’s Contemporary American Theater Festival. Like never before, the CATF Producing Directors explore the step by step details about the programming and play selection process of the 2014 season, and the Playwrights and Directors share with readers revealing behind the scene insights about their inspirations and the development of their new plays.

It’s always refreshing and reaffirming to speak with artists who are not only passionate about the work they do, but are open about sharing their creative process and motivations. 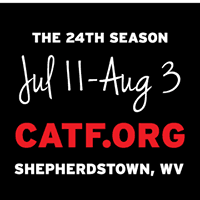 The immersion of five new American plays every year for a month long run is a hallmark of the Contemporary American Theater Festival. The CATF continues this year (thru Aug 3, 2014) in their 24th season of building audiences seeking original, cutting edge, and thought-provoking material from America’s leading playwrights and emerging talents. Founded in 1991 by Producing Director, Ed Herendeen, the CATF is located just 70 miles north of Washington, D.C., at Shepherd University in Shepherdstown, West Virginia.

CATF’s commitment and willingness to take risks on daring and provocative new works underscore the drive and mission of the Festival. “New plays shape the future of the American Theater, and our focus has always been on the play and the playwright,” says Herendeen.

As a leading center for the production and development of new plays, The Contemporary American Theater Festival has fully staged 100 American works, including 37 world premieres, by 72 different playwrights. Each year at CATF, a company of collaborative artists comes together to do this in rotating repertory driven by the stories, storytelling, and the ability to work with the living writer.

For the past seven years, Ed Herendeen and Associate Producing Director, Peggy McKowen have shaped the artistic vision and strategic success of the Contemporary American Theater Festival.

Part One: We go behind the scenes of the CATF as Ed and Peggy share their motivations, strategy, and thought processes about this year’s 2014 season.

Today, in Part Two: The conversation continues with Ed and Peggy as they discuss the themes of this year’s CATF plays and continue with their in depth discussion of the play selection process, and the development and curation of the Contemporary American Theater Festival.

Sydney-Chanele: Last season when we talked you revealed that every year unplanned, and emerging themes evolve among the five selected plays. Without planning it, what themes and throughlines have you discovered among the plays this season?

Ed:  Without planning on it, it’s clear that class is a theme that continues to emerge this season.  North of the Boulevard is set in December before the January Inauguration of President Obama. If everyone remembers, that’s when we inherited the major economic downturn in this country and the squeezing and diminishing of the middle class. Well, these guys in the auto mechanics garage north of the boulevard are the salt of the earth. They are members of the lower middle class. They are desperate; they are struggling just for survival. What happens when you are so desperate? The poor and the desperate, do they get to operate under a different code of morality and ethics than some other people when you are desperate to survive?

There is a major ethical choice that has to be made. That’s going to be a theme that I think you see throughout the season – ethical choices, moral choices. You’ll see that in Uncanny Valley (World Premiere) .

While Charles Fuller’s play (One Night) – and he’ll say this to you – is not dealing with race.  For him, it’s about the military and what the military looks like. It was important to represent the United States military as it is, which means all races and now according to our current military – gender too. So in casting we did not have to consider race.   Whereas in The Ashes Under Gait City and Dead and Breathing race was a specific requirement.

Ed: When you talk with Christina Anderson, you’re going to hear about a process where the play was actually developed and being written in the rehearsal process. So it’s gone through an incredible experience.

Peggy: She’s having a great time.

Ed: And Charles has had an opportunity not only since we first met and started working on the play, but three drafts later once we began rehearsal, and then he came for a week and continued to make changes – especially in trying to tightening up the story. So it was very important to Charles that we tell the the story and we be clear without giving anything away. This is where it’s delicate.

If you remember A Soldier’s Play which became A Soldier’s Story – he won a Pulitzer for that – and then an Academy Award nomination for the screenplay. It’s a mystery, and I think it’s interesting that he also won an Edgar Award for A Soldier’s Play. So he’s at it again, and the military is his subject realm. This time he personally as a veteran is enraged and outraged at the sexual assault that s going on in the military. And if you care to dig into that you will see how many assaults were reported last year in the United States military. So he’s really angry, but he takes his anger out in his writing.  So that’s the big idea in the play, but at the heart of it, it’s a whodunit.

What can you tell me about Peggy’s vision and contribution to CATF as the Associate Producing Director that she might be hesitant to say about herself?

Ed: What you should know about Peggy is that she has an incredible artistic eye, that’s one of the reasons that makes this partnership so valuable. Because when I’m rehearsal for two plays, she has got not only my back but the Festival’s back – as she has her eyes on the whole big picture.

Not only is she good at the beginning, but at this crucial stage when we’re moving on stage for the first time, being able to look at the work and find solutions to things that can happen, and be a part of that collaboration. And I know that’s happening while I’m in my own little world while directing the plays that I am directing. In many ways Peggy keeps an eye on and supports the artists that are here – and in many ways they wouldn’t be here if Peggy wasn’t responsible for bringing them here.

It’s more than just trust; it’s a level of collaboration and knowing that we share the passion for what we’re doing. We’ve been doing this now – How long?  (He says to Peggy.)

Peggy: This year is my seventh season.

Ed: Seems like yesterday. A lot of people in my position would be much more interested in financial people -‘Get me the money to do this work.’ While Peggy also has those skills, James (Managing Director, James McNeel) has picked up a lot of that. In many ways Peggy keeps an eye on and supports the artists that are here – and in many ways they wouldn’t be here if Peggy wasn’t responsible for bringing them here.

As the artistic partner in all of this, how does the CATF play process work for you? The tight timeline seems it could be challenging and frustrating at times.

Peggy: You know it’s not frustrating. It is a challenge of being able to anticipate what you think some needs may be and then make sure that you have enough variable in there that when you start to get those plays you can start to move things around.

Ed: And who the designers are going to be and who the best person for the jobs, so we’re not necessarily hiring designers in November like you would think when you want to lock somebody in for June. When we sort of know what the season is and then we pick what spaces they’re in, then we can go this designer is perfect for North of the Boulevard and One Night, and this designer is going to be perfect for the arena setting – because then we decide what the theater is going to look like.

Peggy: The same thing is true with the directors.

I can imagine. Can you go into the details about the challenges of pairing directors with the plays? How do you go about getting directors when other theaters are making offers far in advance?

Ed: When we were at Humana a year ago we really liked this Director’s work – Tom Dugdale – for Uncanny Valley. Peggy was smart enough to invite him to the Festival last year. He’s from the West Coast and we really think this Director is hot – a really good Director. So like Christina we invited him to the Festival to see the work. So when I finally found this play and started reading it with them, he was the perfect choice for that play. After he read the play,  we locked him down pretty early.

Peggy: We could pick a team of Directors next year without knowing the plays. We could do that. But we don’t do it that way even though it would probably be easier because it’s really important to us to put the right storytellers with the right story. It does not behoove us to randomly associate creative people with projects that don’t speak to them, that their not passionate about and if they’re not willing to commit to this hard schedule and tough season. You have to love what you’re doing and be committed to it to do it well. So putting those right teams together are crucial. It’s worth the wait!

The Contemporary American Theater Festival (CATF) runs July 11- Aug 3, 2014. Performance tickets to CATF can be purchased through the Theater Festival Box Office, Monday to Friday from 11 am to 5 pm, by calling (800) 999-CATF (2283), or visiting online.

LINKS:
Go HERE to learn more about the plays, or HERE for a look at the full schedule.

The Playwright’s Playground: ‘The Playmakers – CATF 2014: Interview With Ed Herendeen & Peggy McKowen Who Preview The Season.

DCMTA  – ARTISTIC SPOTLIGHT: Ed Herendeen. An Interview with the Founder and Producing Director of the CATF.

The Playwright’s Playground is a monthly in-depth conversation with local female playwright in the D.C. theatre community. Female theatre artists make up more than 50 percent of those involved in the theatre, yet the number of female playwrights being produced is dramatically lower. In this continuing Series, I will also interview and introduce DCMTA readers to the many talented playwrights in the DMV area to learn about their writing process, their inspirations, and their motivations and struggles to write and produce their art. Sydney-Chanele Dawkins.