Consider, if you will, a 15-year-old boy growing up in Brooklyn, New York who longs to be a baseball star with the Yankees, but would give up that dream if he could see a naked woman for two and a half minutes! He is Eugene Morris Jerome, played by the ultra-talented Danny Santiago in Sandy Spring Theatre Group and The Arts Barn’s spectacular and thoroughly entertaining production of Brighton Beach Memoirs. Premiering in 1983, this semi-autobiographical play was written by the legendary Neil Simon and is part of his “Eugene Trilogy” along with Biloxi Blues and Broadway Bound.

Brighton Beach Memoirs is certainly a laugh-out-loud comedy, but we found a generous helping of pathos and poignancy, as well. This coming-of-age story is set in the Brighton Beach area of Brooklyn, New York in September 1937 and peeks into the lives of the Jewish-Polish-American Jerome family. With the threat of the “biggest war ever” looming, Eugene and his family struggle through everyday problems and some not-so-everyday problems with humor and love.

Under the superb direction of Bill Spitz, the entire cast is impressive. For example, as a high school junior himself, Santiago beautifully captures the bright but somewhat naïve and curious teenager facing the challenges of puberty. This young man’s performance is truly that of a seasoned professional! Even when Eugene is making wisecracks in a perfect Brooklyn accent, Santiago provides a layered and nuanced performance.

Eugene has what he describes as a love-hate relationship with his older brother, Stanley, splendidly portrayed by Joe Myers. Myers’ talent shines as Stanley instructs his younger sibling in the “facts” of life—as he sees them—and leads by example in standing up for his principles and for his family, even when the two conflict. On the other hand, Stanley periodically gives into his vices, such as casual sex and gambling.

A super-standout is Mara Bayewitz as Eugene and Stanley’s mother, Kate Jerome. In street clothes, Bayewitz looks 30-ish, but through the magic of costumes, make-up, lighting, and her tremendous talent, she is transformed into a 40-ish Jewish mother, practical to a fault, who loves her family to pieces, even when she is yelling at them and insulting them. Kate harbors feelings of envy and disappointment dating back to her childhood, but most of the time she keeps those feelings to herself and covers them with humor. Bayewitz brings the house down with her excellent timing and comedic flair, which also allows Kate to keep her emotions in check.

Kate’s husband, Jack Jerome, is the long-suffering, hard-working patriarch who, no matter how many problems he has in his own life, always takes time to help his family. Keith Cassidy turns in a bravura performance in this complex role that is both touching and hilarious at the same time. Jack is not only extremely generous to his immediate family, but to his extended family, as well. He works two jobs to support a seven-member household, which includes his wife’s widowed sister, Blanche Morton (Karen Winokur) and her two daughters, Nora (Callie Etches) and Laurie (Lydia Levy).

The roles and relationships are somewhat complex. In addition to his ambitions to be a baseball star and/or a famous writer, Eugene is interested in girls and sex and is infatuated with his cousin Nora. To his disappointment, his brother Stanley explains that “it is illegal” to have sex with your first cousin, because “you’ll make babies with nine heads!” Nora is not interested in Eugene, but rather in a dancing career, and she has a chance to audition for a role on Broadway. Her younger sister Laurie supposedly has a “heart flutter” so she doesn’t have to do chores around the house, causing resentment in Eugene, Stanley, and Nora. Blanche lost her husband six years earlier and because she had focused all her attention on him, she is just now learning how to relate to her daughters. Nevertheless, they manage to represent a cohesive, loving family.

Special mention goes to Costume Designer Maggie Skekel, Lighting Designer Joe Connor, and Props and Set Dressers Karen Petersen and Karen Dugard for transporting us back to a late 1930s lower middle-class home in Brooklyn, New York, complete with a Depression-era radio that worked only intermittently to provide news of Mussolini, the World Series, and a 100-year-old woman in the same broadcast. All the set pieces stay in place throughout the entire show, and only lighting is used for the scene changes.

With its moving, relatable story, talented performers, skillful production staff, and mega-doses of comedy, Brighton Beach Memoirs is a triumph! We laughed; we cried; we applauded; and we cheered! This production is not to be missed, so reserve your tickets today!

[NOTE: Sandy Spring Theatre Group advises that this show is appropriate for ages 14 years and older.] 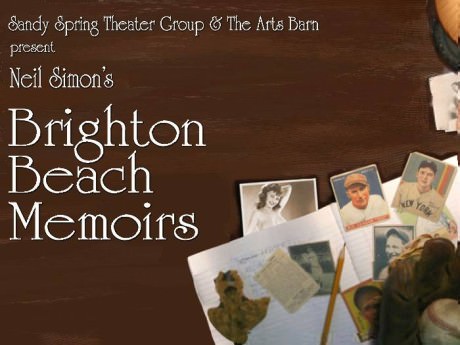 Brighton Beach Memoirs plays through May 24, 2015 at Sandy Spring Theatre Group, performing at the Gaithersburg Arts Barn – 311 Kent Square Road in Gaithersburg, MD. For tickets, call (301) 258-6394, or purchase them online.