Exile, home, memories – these fundamentals are dreamily explored in an inventive interpretation of Argentinian playwright Aristides Vargas’ play, Our Lady of the Clouds, or Nuestra Senora de las Nubes. The play nominally centers on two exiles – Oscar and Bruna – who confront each other again and again through a series of vignettes, often without memory of having met each other, often with the same question stirring at their hearts, “What country are you from?” 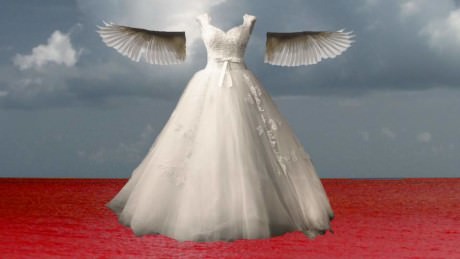 The design is spare – set designed by Colin Dieck, with props by Cindy Jacobs, and stage managed by Becky Mezzanotte – invoking a surreal after-life setting. White gossamer curtains outline the contours of the stage; the two performers, Edward C. Nagel and Liz Dutton, clad in simple black with suitcases to denote their journey.

Nagel and Dutton, playing Oscar and Bruna, respectively, are strangers hopelessly looking for connection to each other and to their pasts, nostalgic for homes only lingering at the edges of memory. Both actors are virtuosos in transformation – they play no less than a dozen characters (I lost count), from an old woman and a half-witted boy to a governor and his wife to a shy girl and an overbearing father, with grace and seamless transition.

Oscar and Bruna tell each other stories of their country: fanciful memories of corruption, persecution; also of incest, pain, wistfulness for something that can’t be defined as to why it should be missed. “An accent is easily lost…” says Oscar – “…like virginity,” finishes Bruna. They finish each other’s sentences; they are two halves of the same person.  But that person is not a loving one, it is one of nostalgia, it is one that is always looking back. Through these zig-zags is revealed the pain of exile, the pain of otherness, of displacement and the unceasing search for home. This is not to say this is a heavy-handed performance; there are many notes of humor, with a magical realism and sheer poetry to many of the lines (“birds are animals that have no memory”; “when we were 20, we were enveloped in a single smell”).

All of the performances for this production will include an after-performance discussion with Nagel, Dutton, and Zimmerman. This is particularly interesting given that the three developed the play together. As Zimmerman notes in the program, Vargas wrote the play as a sketch – a framework from which actors and director can build and grow the full play. The three changed the script, reordered some of the scenes, and changed language, thus making each production completely unique to any other production of the play. Vargas, himself an exile in Ecuador, has applied the notion of exile to the act of playwriting itself – ensuring that any memory we have of having seen this play before will be, like memories of our hometowns, forever blurred.

Our Lady of the Clouds plays through Saturday, July 25, 2015 at the Atlas Performing Arts Center: Lab II at 1333 H Street NE. For performance times and to purchase tickets, visit their Capital Fringe Page.