The Life of King John is a one-of-a-kind interpretation of Shakespeare’s historical play, directed by Alan Duda. The production weaves elements and references from Monty Python’s Spamalot into this Shakespeare work. Though many of the jokes were either predictable or ‘unique,’ the humor set a goofy, entertaining tone. 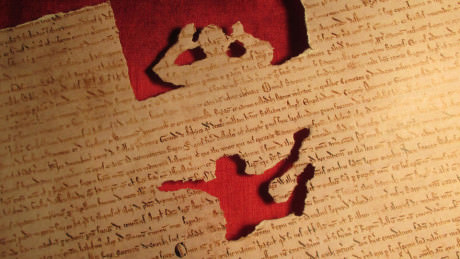 Peter Eichman and Mikki Barry, who played the Duke of Austria and King Phillip of France respectively were the most successful at bringing in Monty Python elements into the play. This was most apparent in Eichman’s Pythonesque falsetto voice which hilarious. Barry’s equally hilarious French accent was a highlight of the show. Additionally, Barry’s expressive face garnered at least as many laughs as the best jokes of the production.

Sam David was another highlight of the show. Her pouty performance as the complaining Lady Constance was excellent. She was literally hopping mad at times and her condescending, bipolar parenting towards her son, Prince Arthur.

Prince Arthur was played by Holly Trout. She played the idiot really well, regularly eliciting big laughs from the crowd.

Evan Ockershausen played King John. He was great in displaying the winey, entitled attitude of a boy brought up in utter privilege.

Center backstage was occupied by a castle with a window and red curtain.  Other than that, the stage was empty which left a lot of room for movement. Director Alan Duda capitalized on this during the fight scenes. During these scenes, the two opposing armies – French and British – would yell at each other then exit the stage. Then, certain members would run across the stage frantically with a weapon. It was pretty funny. Other than that, however, I wish Duda had put the large amount of space to better use. There were long scenes in which the entire cast would be on stage simply standing and watching two characters converse.

Costume Designer Moira Parham adequately portrayed the times and the genre. The knights wore tunics. The king had a crown. The French soldiers had chain mail. Parham’s best creation were either the black and purple robes belonging to Lewis the Dauphin or the three headed man suit of the Earls of Essex, Pembroke, and Salisbury. Also of note is the fact that Peter Eichman was able to change costumes from woman, decked out in full dress, to the fighting Duke of Austria on stage in mere seconds!

The Life of King John is a lighthearted, blithe play based on Shakespeare’s play King John. It is funny and unique pokes fun at many things – including Fringe management! If your humor is silly with a dash of lewd, it’s ideal for you.