Memories can break you down. They can take away your power, strength and ability to trust. In the Capital Fringe Festival show Purge, the fusiondance company uses contemporary dance and excerpts from poetry to demonstrate the releasing and sharing of memory through a performance full of power, strength and trust. 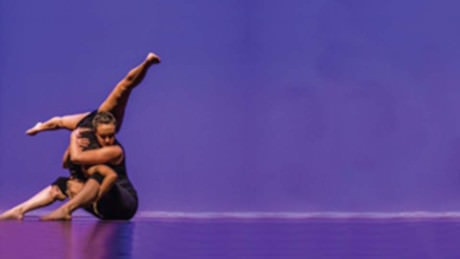 Choreographed by Candra Eglin, Laura Gelles and Shelley Siller, Purge demonstrates power through both its dancing and poetic content. In the section “Dknaack,” the dancers release their formerly braided hair and become powerful jungle animals, including fierce lions. In another section, after Director Candra Eglin reads the incredibly sad poem “I’ll Need a Pinky Swear” by Courtney Roth (a tribute to her dying son Tripp), Laura Gelles dances a powerful and breathtaking solo as Courtney Roth, reaching her arms out for her lost son.

The dancers are unbelievably strong. They lift each other with ease and can balance their entire bodies on the front of their toes. They show emotional strength as well, such as during the piece “Shards,” where the audience sees the gorgeous dance interpretation of a former couple trying to be strong as they recall the memories of their now shattered relationship.

Trust is a very important part of this show. At certain times, dancers will hang upside-down from the shoulders of others, their foreheads just inches from the hard floor. They put so much trust in each other through their dancing and the stories that they tell, which moved the audience to tears (especially during “The Prayer”).

There was a several-minute pause at the beginning of the show, when the lights were not working as expected.  But dancer Justine Lee announced that “The show must go on” and she along with Eglin, Gelles, Kathleen Howard, Emilia Montalvo, Lindsey Rodriguez and Shelley Siller put on a beautiful show.

Memories can be hurtful, but seeing Purge is a memory that you will not want to ever forget!