Ripple of Hope is Karen Sklaire’s contribution to the teacher as hero genre – which can never have too many entries. This one-woman show is funnier and a lot more honest than some of the move clips she shows through the piece.

Sklaire explores her own biography as an equity actor who took up teaching after 9/11, wanting to follow Hillary Swank of Freedom Writers fame and make a difference or maybe just do something that matters and ends up in the south Bronx in some of the most intimidating classrooms in the country. 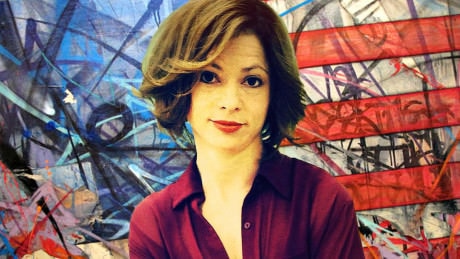 Backed by an ingenious technical design by Alex Chmaj that brought the play to life with schools bells and rap music and accompanied by projections and video clips by Lee Caplan, including some of her own students performing, this multi-media show ranges from sketch comedy to cautionary fable about what common core and testing is doing to our schools. It’s helmed by acclaimed Broadway director Padraic Lillis who creates interest and suspense in every scene –- turning a monologue into a full-fledged production.

Sklaire particularly thrives when she gives impressions of her students. She transforms her voice and body into a troublemaking elementary school kid or a gangster high school senior. The inspiring stories are also a highlight: from Le Jean who stopped hitting his peers through Michael Jackson choreography to Felix the gang member turned college theater major. Sklaire’s travails as a first year teacher are hilarious, beginning with her first period attendance taking adventures. Her struggles with the administration and various principal’s obsession with standards is heartbreaking, but Sklaire is ultimately hopeful. The title is drawn from a quote by Robert F. Kennedy about the fact that all of us can be ripple of hope in the world.

Overall this is a polished, fun production with just the slightest whiplash in tone between earnest appeals and slapstick humor; Sklaire clearly has kept her skills sharp onstage and we can only be grateful that she’s chosen to share her considerable talent with these kids – and has chosen to gift us with the story.

Ripple of Hope: One Teacher’s Journey to Make an Impact plays through Saturday, July 25, 2015 at Tree House Lounge –1006 Florida Avenue, NE, in Washington, DC.  For performance times and to purchase tickets, visit their Capital Fringe page.

LINK
Read the preview on DCMetroTheaterArts.

RATING:  BEST OF THE 2015 CAPITAL FRINGE