Somebody get Eddie Lounge a cocktail — and maybe a ream of cocktail napkins to wipe his beady, bald head. What’s a guy gotta do to get a drink around here?!

The Lord of Loungeology is singing his sequins off, back to ol’ tricks after “10 years” (if you do the math, more like eight) in The Eddie Lounge Reunion Tour: The Lounge Awakens. Most of his Fringe groupies in the sold-out premiere were backing him up, wriggling in their seats. But to the uninitiated and unbiased observer, the stars of this act are hands-down keyboardist Mo Heeto (Alex Romain, also music director), unassuming and suave; the dazzling Gina Tonic (Melissa Romain, married to Alex, sister of bassist Weymouth Spence), with her gold-plated pipes; and Lounge’s sidekick-rival Rico Bublé, er, pronounced “bubbly” (Jeremy Zucker), who dares to challenge his master to a duel. 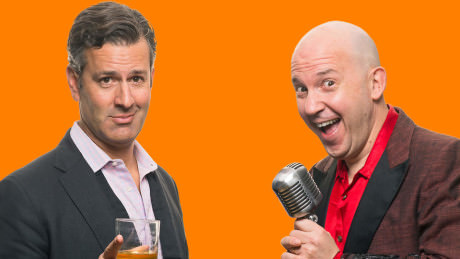 Lounge (Ed Spitzberg) is ever the snappy dresser in his maraschino-cherry dress shirt, cosmo dinner jacket and Liberace accents. He’s nimble and charming, but his satire Thursday came off about as dry as vermouth. Bass player Vern Mooth (Spence), though, added velvet harmonies in the early numbers to kick things up a notch.

The show, which opens with a VH1-style multimedia presentation, didn’t find its groove until Rico — a head taller and with a smoky baritone perhaps an octave lower than Eddie’s – butted in to tackle Barry White’s “Can’t Get Enough of Your Love, Babe” (and scored!). Then, on Radiohead’s “Creep,” with his bow tie undone like a junior Rat Packer, Rico sang like an angel and I floated like a feather. Suddenly, the clever shtick of reciting classic rock/funk/punk lyrics like a square aiming for au courant at a bar mitzvah shifted into waggish overdrive. We get it! We love it!

Director Walter Ware III deserves an extra splash for fleshing out all of the characters, including the five-piece band members. These fiercely talented fellas – including Dave Spitzberg, Ed’s real-life brother, on drums, Jim Malcolm on guitar and new guy Mike Nilsson on sax and percussion — manage a Big Band sound while venturing beyond musicians’ typical hi-yo! banter. When Mo steps out from behind the piano for a genuine scene and oozy duet with Gina, it’s mmm-mmmm, good. They deliver the best choreography — until the finale.

The actual “Lounge-Off” – part rap battle, part boxing match – is a howler. Eddie and Rico go three rounds, with the radiant Gina assigning categories like double jeopardy. First, A Song Sung at Their Junior Proms; second, A Song Sung After Dark (Rico’s choice is rich!); finally, A Showstopper. The audience lapped it up and could have gone several more rounds. (Where are those drinks?)

If you manage to snag a front-row table, brace yourself for some interaction – what would a lounge lizard be without folks to schmooze with? Actually, no matter where you sit, you’re not safe.

Hearing the soundtrack of one’s youth spoofed old-fogey style is funny in itself – this production escalates to Name That Tune with punch lines. And the finale (no spoilers!) is brash and brilliant. If someone recorded that, it’d go viral. One more time!

So embrace Eddie Lounge and his minions with open arms for a full-blown tickle fest – if you can get a ticket.