Next Fall, Geoffrey Nauffts’ mind-bending play opened Friday for a brief run at Upcounty Theatre at Germantown’s Black Rock Center for the Arts. It is an excellent production with a superb acting ensemble, directed by Matti Jane Dickenson, who has been a member of the new theatre group since its inception five years ago. 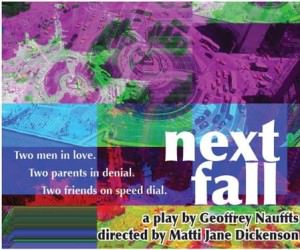 The problem is that Adam is a confirmed atheist while Luke, astonishingly enough, is a devout Christian who prays to Jesus—invariably after sex—and fully expects to go to heaven. The reason is that he believes that homosexuality is a minor sin, more acceptable than murder.

Naturally, Luke would like his partner to join him in the Hereafter, but Adam is unable to embrace what is, to him, an irrational belief.

Luke’s parents, a couple of wacky rednecks up from the Florida Panhandle, are unaware of his gay life. Played by Bill Craley and Joni Donlon, Butch is the God-fearing fundamentalist father, and Arlene is the hippy mother who still—20 years after abandonment and divorce—manages to embarrass her son in public.

Luke and Adam both work at a candle shop in lower Manhattan whose owner, Holly (Kelly Peters) and another sidekick, the enigmatic Brandon (Geraden Ward), are the friends-in-waiting.

The play’s structure is simple. A freak traffic accident lands Luke in the hospital, where the rest of the cast waits for news of his recovery. Scenes in the waiting room—where the visitors trade insults—alternate with flash-backs to the first five years of the Luke-Adam relationship.

In spite of its nine alternating scenes, sets and costumes are changed with lightning speed, thanks to Stage Manager Skye Knight and Joanna Chilcoat Fellows, who is props master. (Fellows also plays Holly in next weekend’s performances.) All the “techies” are current or former students of hers at Seneca Valley High School, where she is head of the drama department.

A single set, designed by Evan Ibraham, serves as the basis for every scene, with benches that turn into couches and beds, waiting room chairs whisked on and off stage and personal items packed and unpacked.

One of the most moving scenes is set in front of the closed curtain, on which a video image of a chapel is projected, by Video Designer Patrick Donlon.

Erik Keiser’s costumes carry the story along, often telling us as much about a character as a slouch or a smile. Adam’s baggy sweaters and pants are a part of his persona, just as Luke’s perfectly pressed tight trousers and shirt are his.

While everyone connected to this production is to be commended, much of its power and beauty stem from the play itself.  Playwright Geoffrey Nauffts spent most of his career as an actor, and it shows. Next Fall is a marriage of jokes and theology, a play where characters can flip from caricature to credibility and maintain a level of emotional and intellectual depth that are all too rare on the contemporary stage.

While Next Fall starts out as hilarious comedy—think of it as Neil Simon meets Woody Allen, or a gay Odd Couple mixed into Annie Hall (there are even references to Our Town)—it slowly dissolves into a Tony Kushner-like world. Tensions between generations and beliefs yield to some profound questions, exploring the gap between religious fundamentalism and contemporary views of sexuality, evolution, heaven and hell.

The play’s history bears out this dichotomy. It opened in 2009 to rave reviews at Playwrights Horizon—Ben Brantley of the New York Times called it “an intellectual stealth bomb”—and had its run extended twice before moving to Broadway, where it opened at the Helen Hayes Theatre in 2010.

Although it was nominated for two Tony Awards and actually won an Outer Circle Critics Award, it closed in less than four months.

Happily for us, Next Fall lives on at Upcounty Theatre. There are just two more performances left, so grab the phone or an iPad, order tickets and get on out to Black Rock in Germantown,  MD. 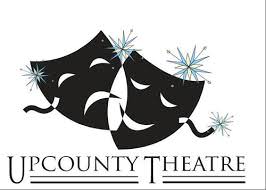 Next Fall plays through August 22, 2015 at Upcounty Theatre performing at Black Rock Center for the Arts -12901 Town Commons Drive, in Germantown, MD. For tickets, purchase them at the door or online.