Marquis D. Gibson does something in his magnetic performance as the title character in Bhavi the Avenger that I don’t recall ever seeing in theater before: he pretty much singlehandedly makes sense of an entire 90-minute play. Solely through his remarkable moment-to-moment emotional investment in the role—which never wavered and never seemed anything but truthful—together with a dancerly physical presence that was mesmerizing, Gibson kept me engaged in a story, and caring about a character, that I am  almost certain I would have found so layered under metaphor and parable as to be, at least on first viewing, puzzling.

In this launch production from Convergence Theatre (part of CulturalDC’s Mead Theatre Lab Program), Gibson plays a young man who works in a call center. When he dons his telephone headset and answers a caller, his is the voice we hear from somewhere around the world, typically India, asking for instance for the model number in order to troubleshoot some glitch in a gizmo. As often as I’ve spoken with such a distant voice, I’ve never wondered what this person’s life might be like. Playwright Tearrance Arvelle Chisholm has, however—and in doing so he has situated that imagined life in a story line so idiosyncratic its import still has me pondering.

Of great importance for Chisholm’s main character is his name. He prefers Bhavi, his birth name, which was also the name of his father, who died before he was born. As correctly pronounced it rhymes with lovey; its first syllable is like the second of above.Callers from abroad kept hearing it as Buddy, though, and eventually for familiarity’s sake it became Bobby. But in his real life Bhavi wants to be called Bhavi, especially by Bill, his smarmy and overbearing white boss (played appropriately gratingly by Alex Miletich IV). But to Bhavi’s earnest and sincere request, Bill says no way—the first of many disses and identity derisions we will see Bhavi endure on his job.

There are several side stories, including Bhavi’s infatuation with Prudence (the sweetly graceful Inés Dominguez del Corral), who has a third eye with which she can see past and future. Another involves Amma, Bhavi’s no-nonsense mom (the robustly stolid Kecia Campbell), who drives a taxi and accepts, if not encourages, Bhavi’s and Prudence’s canoodling in the backseat.

And then there are the layers of metaphor and parable. A pregnant elephant has been savagely killed, decapitated, one year into what should have been a two-year gestation. When Bhavi learns of the carnage from a news broadcast (Miletich doubles as an unctuous Radio Announcer), he is grief struck, such is his sense of connection to the animal. The elephant then appears as if in an afterlife—portrayed in this production as  shadow play—and sternly gives Bhavi a mission of revenge: “Find the man who deserves his death,” the elephant says (for it speaks, periodically in poetic but opaque parables), “and kill him.”

As if to taunt him into confronting the elephant’s unequivocal instruction, Bhavi keeps finding handguns in the oddest places (including in the container of mulligatawny soup his mother gives him!), which becomes a very funny running sight gag—until its repetition also becomes strangely unsettling. In the well-known convention of playwriting, one can expect that if a gun is displayed on stage, it will later likely be used. Well, here Bhavi finds handguns all over the place. Given the motivation to murder the man who deserves it (as per the beloved elephant’s charge) and the lethal means so readily at hand, what is Bhavi going to do?

In truth that sounds more suspenseful than Bhavi the Avenger plays. Director Elena Velasco’s spare staging puts the audience right in the action—two banks of chairs facing each other with a runway down the middle for live actors and a rear-lit screen at one end for the shadow puppetry—and the result is engrossing. Nathaniel Collard’s lighting is entrancing, notably when it creates ripples of water or a chameleon skittering about the playing space. Madeline Belknap’s apt costumes give us important details of character that we might not glean at first glance. A nonspeaking character credited as Performer (Asif Majid), plays a deft role as Bhavi’s dresser in addition to drumming now and then. The theatrical effect of the multiethnic casting and the imaginative stage craft is intriguing, even as the play itself yields temporary puzzlement.

I say temporary because as I write this the morning after, the meaning of Bhavi the Avenger forms more clearly in my mind. It very much has to do, I think, with Bhavi’s place in the play as what a promotional squib calls a “model minority.” And key to my supposition is Gibson’s illuminating performance, which makes palpable, in ways the ambitious script doesn’t quite, exactly what it means and feels like for a person of color to experience unceasing microaggressions in a white-defined work world and to endure it with a chipper smile, because the alternative is no job. To tell more about Bhavi’s compelling character arc would be to give too much away.

Suffice it to say, when you see this enigmatic play, the character of Bhavi as indelibly embodied by Marquis D. Gibson will stay with you long after. 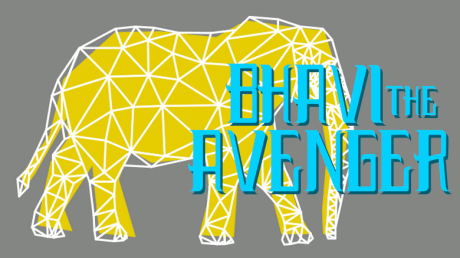 Bhavi the Avenger plays through October 11, 2015 at Convergence Theatre performing at The Mead Theatre Lab at Flashpoint – 916 G Street NW, in Washington DC. For tickets, buy them at the door 30 minutes before the performance begins, or purchase them online.