“I say there is no darkness but ignorance.” That’s a direct quote from the Bard himself, good old Willy Shakespeare. It seems appropriate to mention it, because Iron Crow and Cohesion Theatre Company, two of Baltimore’s edgiest theatres, have teamed up to present a unique production of Shakespeare’s Twelfth Night, as part of their Trans Voices Workshop Series. Their joint effort is shining a light on the transgender community by using gender-blind casting.

The point is to encourage an audience to think about the subject of gender. Several of the male roles are played by females and one of the female roles is played by a bearded guy wearing a skirt with absolutely no artifice or feminine mannerisms. In Shakespeare’s day the women in his plays were always played by men. It begs the question of how many of the actors who played the great females like Lady Macbeth or Desdemona or Katherine were, if only for their hour upon the stage, really living their true lives.

From the video production that greets the audience pre-show with actors responding to the question, “What color is my gender?”, the issue of gender is right up front. It’s a nice touch, because the story of the shipwrecked twins, Viola and Sebastian, and how Viola assumes the identity of a man in order to survive in an environment where she has no resources other than her wits, addresses some of the same issues being faced by the trans community more than 400 years after the play was written.

This well-paced, 90-minute romp has some outstanding, some less than, but all very entertaining moments. Phil Vannoorbeeck has adapted the original script and directed it with excellent timing, keeping the story moving and allowing most of the actors to play to their strengths.

The unfortunate acoustics of the performance space made it difficult to understand some of the dialogue but even if the audience members were novices to the story, it was fun to watch. The set was minimal– it was a couple of chairs and a table – and Vannoorbeeck used the space well. Katherine Beem’s costumes were modern-day, another wise directorial choice given the concept. Alice Stanley did the music direction and interspersed the action with well performed songs in her character of Feste.

Logan Davidson plays Cesario/Sebastian and does a fine job. At her best when she’s being indignant at the unwanted attentions of a female suitor and in the scene where she is challenged to a duel by a rival, she’s funny and effective. I do wish, however, that she would have done more to demonstrate her emotions in the scene when she meets the Count who she had fallen in love – while disguised as a man.

Matthew Payne is an over-the-top drunk Peter Sellers descendant as Sir Toby. He’s a lanky, swanky mess, annoying, and delightful to watch. Caitlin Carbone as Sir Andrew is a rubber-faced perfect fit. And Lilian Oben, as Olivia, is regal and spot on. This gifted actor is one I’ll look forward to seeing in future productions.

Speaking the words of Shakespeare’s characters is daunting even to the most skilled actors. It’s hard and requires a command of diction and acting chops that a lot of pros won’t go near. Hats off to this earnest cast and director, and the Trans Voice Workshop Series for tackling Twelfth Night, and landing a solid effort that not only entertains, but highlights a segment of society that needs to be seen and heard. 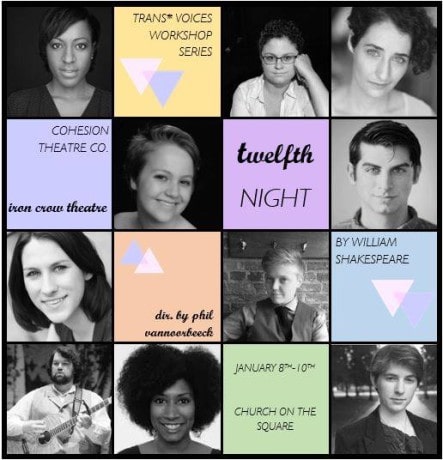 Twelfth Night plays through tomorrow January 10, 2016 at 4 PM at Iron Crow Theatre and Cohesion Theatre Company performing at Church on the Square – 1025 South Potomac Avenue, in Baltimore, MD. For tickets, purchase them online, or at the door.