In Part 2 of a series of interviews with the cast of Avant Bard’s production of A Midsummer Night’s Dream, meet Jon Jon Johnson.

Most recently, I appeared in Straight on til moUrning [sic] with ReLease, It’s a Circus Out There with Federal Theatre Project, and Flying V Fights: Heroes and Monsters with Flying V

Why did you want to be part of the cast of A Midsummer Night’s Dream at Avant Bard?

Wayang Kulit is an art form from my homeland. I rarely get the chance to do shows that have anything to do with my own culture, so I felt it imperative to get cast in this show. As an Asian-American actor, I rarely get the chance to represent important aspects of my person on stage. I also adore the work that Deb [Debra Kim Sivigny, set and costume designer] and Randy [Randy Baker, director] do, and I’ve been trying to work with them for years. Getting cast felt like fate, or some other lofty concept.

Who do you play in the show? How do you relate to them?

I play Robin Starveling and Mustardseed. For Starveling, I connected with the person who’s working a survival job, but really wants to be a performer. I spend a lot of time at my day job daydreaming about my various artistic projects and pursuits. Mustardseed, on the other hand, allows me to connect with my sense of whimsy.

What’s the show about from the point of view of your characters?

Starveling: The relentless pursuit of art and expression.
Mustardseed: Humans are weird.

Director Randy Baker has reimagined the show with shadow puppets and a percussion orchestra. For you as a performer, what’s new and different about it, and what are you enjoying about it?

I greatly enjoy puppetry and music, so any chance to get to play around in those disciplines is always fun. Puppetry is not at the top of my skillset, so it’s a refreshing change to work entirely on vocals, soft focus, intent, and telling a story through a third party. As for the music…well, music’s what I do best! I like that Randy, and our music director Jimmy [James Bigbee Garver], will just point me at an instrument and let me go to town on it.

Starveling: “I fear it; I promise you.”

This line always amuses me, because Snug (a lady) is worried about how a lion will scare the ladies (Flute and Quince are also ladies). Yet, of the three ladies, Bottom, and myself, I’m the one who’s most likely to be scared. It’s the one line where I get to take a stab at gender roles and prejudices often evident in classic plays.

I’ll be in The Merry Death of Robin Hood with LiveArt DC and Be Awesome: 90’s Mixtape with Flying V.

What do you want audiences to take with them after seeing A Midsummer Night’s Dream?

I want audiences to understand the importance of socially conscious casting. I want audiences to understand the fine line between cultural exchange and cultural appropriation, and how respect plays a major factor in differentiating the two. I want audiences to see the numerous actors of color in the show, coexisting peacefully among white actors, in a world that is somewhere between Athens and Jakarta. Randy had talked to us about the real world, and the world of shadows, and finding that little crevice in between them. Our play, in terms of social responsibility, feels like that crevice; we have found a balancing point where it’s not appropriation but exchange. The costumes in the show, meticulously planned by Deb, reflect both Eastern and Western traditions. The inclusion of Wayang Kulit is not a blatant lift from one culture to another; Alex Vernon [puppet designer] has masterfully found a way to craft the puppetry in such a way that it very clearly respects puppetry traditions of both the west and the east. The entire process has been respectful to my cultures; nothing has been done simply because it “looks cool.”

It’s imperative to me that people understand the blend. This very blend of Eastern and Western traditions exists within my person, as an Asian-American, with European and Southeast Asian ancestry. I’m that crevice between the two worlds, and it’s very much a core of my identity. I want audiences to understand that even a show full of lighthearted fun, whimsy, and really cool puppets can still have an impact on our theatrical tradition, and the culture of our artistic community. 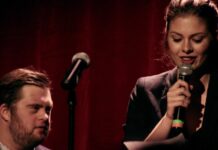