At the first press night of The History Boys by Alan Bennett, the cast and creative team were laughing and joking as the audience began to arrive. A fire had started in the flies of the theater, and the flames set off the sprinklers, leaving the stage full of water. The power immediately switched off and the firemen had to wander around in the dark. One fireman accosted Bennett in a corridor, asking him the way to “this Lyttelton Theatre.” It took an hour to clean up the mess and drips of water fell on the actors throughout the performance. Fortified with free drinks, the audience was appreciative and the play went on to great success. In his book, Untold Stories (Farrar, Straus & Giroux, 2005) Bennett himself points out that this incident is a perfect illustration of one of the themes of the play, the unpredictability of events; or, as his character Rudge puts it, history is just one f**king thing after another.

Dominion Stage’s The History Boys is one of those productions that will stay in my mind and heart for years to come. The play is a complex and deeply emotional portrait of seven boys, and three very different teachers, as they prepare for the dreaded exam which will lift them from the wilderness of Sheffield to the glittering prizes of Oxford and Cambridge. Hector, in a superb performance by Lyle Blake Smythers, encourages the boys to sing, improvise, act out old movies (Now, Voyager and Brief Encounter are two) and recite some of Britain’s finest poets, from Thomas Hardy and Wilfred Owen to Stevie Smith and W.H. Auden. His most important lesson is his passion for words. The boys’ anarchic energy, spiked by Hector’s erudition, explodes all over the stage in a tumultuous paean to adolescence. Hector disapproves of the boys’ ambitions for Oxbridge, and is determined to bring them a deeper understanding of art. He also locks the door while teaching. 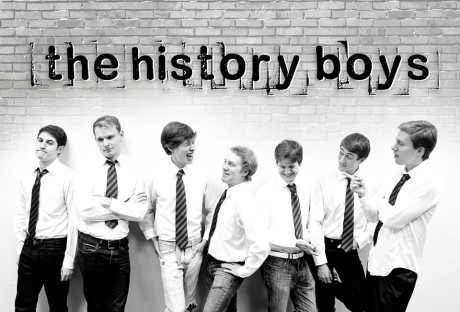 Irwin (Mike Rudden) has been brought in to “teach to the test.” His theory, developed by Bennett while studying for just such exams, is that answering exam questions is really like journalism; going for “the wrong end of the stick,” as Bennett puts it, gets you more attention and keeps the examiners awake. What could be more relevant in the age of 24-hour news and infotainment? Rudden as Irwin has an attractive modesty about him, and he handles his most difficult scene, involving sexual overtures from a student, with honesty and poise. Irwin suggests that Wilfred Owen actually enjoyed World War I, despite his nervous breakdown during it. (Anyone who has ever read Owen’s poem “Dulce and Decorum Est” might attest to the limits of this particular “spin”.)

The sole female character is yet another teacher, Mrs. Lintoff, played with understated wit by Sally Cusenza. She has done the drudge’s work of making sure the pupils are up to date on the boring facts (that is the actual answers) while Hector supplies the passion and Irwin the dramatic flair.  She notes that Elizabeth I was unusual in the sense that she actually got to use her abilities, whereas most women in history, as in 1919, “arranged the flowers and gracefully retired.” (I note that those were probably the lucky ones!) Cusenza does especially fine work in this self-assured speech.”History,” she says, “is a commentary on the various and continuing incapabilities of men. What is history? History is women following behind with the bucket.”

The Headmaster, beautifully played by John Barclay Burns, has the impossible task of explaining all this to the higher-ups, and protecting, ah yes, the reputation of the school. “It’s not NORMAL,” he states, while admonishing Hector for his advances to the boys. His Headmaster is something of a martinet, but he sees himself as an administrator who is just doing his job and attempting to be fair.

Adrian Iglesias (Dakin) is the focus of much of the sexual tensions swirling around the group. Handsome as well as intelligent, he is “seeing” the Headmaster’s secretary, but he has other interests as well, and the sensitive Posner (Alex Lew) adores him. Iglesias as Dakin is more socially adept than the others, and he navigates these troubled waters skillfully, without a trace of self-consciousness.

Posner (Alex Law) by contrast is all self-consciousness; he feels so deeply that he is almost incapable of action.  One is reminded of Baudelaire’s words about the poet; “Ses ailes de geant l’empechent de marcher.” (His enormous wings prevent him from walking.) Posner’s performance is a marvel; one’s heart aches for him. As often happens, the one who learns the lesson best has the hardest time moving on.

John Posner as Scripps narrates the story; his “angle” is religion, and he emphasizes his piety to get ahead. He is a voluble and engaging presence.  Here he describes his younger self: “I have never particularly liked myself but the boy I was, kneeling in that cold and empty chapel that winter morning, fills me now with longing and pity.”

Rudge (Morgan DeHart) is the athlete of the class, who knows he is thought to be “thick” but tries not to care. He is winsome and full of delight when he can win a round with his classmates, though it doesn’t happen often. His belief in himself enables him to shrug off the epithets his peers confer on him.

Jarod Rouleau (Lockwood) and Scott Duvall (Crowther) turn in sensitive, assured performances. Nathaniel Klein (Timms) has a wry humor which makes him a pleasure to watch.

Director Haley Murphy has done an outstanding job of creating the fevered crushes of adolescence, the high spirits, the near frenzy, and the overwhelming energy that keeps the boys going and going and going, until they collapse into a heap. Alan Bennett has larded the script with quotations from some of the greatest poets in the language, as well as flashes of insight into how history came to be, and how it could very well have been something else.  Such are the joys and indignities of a classical education.  The cuts in the script by Dramaturg Talley Murphy (one character, Akthar, is eliminated) work well, keeping the essence of the play intact.

Hector gets into trouble because of his predilection for getting a little too close to his students. He quotes A Shropshire Lad 31; On Wenlock Edge the wood’s in trouble by A.E. Housman. Housman imagines an ancient Roman looking at the exact same forest: “The tree of man was never quiet; then ‘twas the Roman; now ‘tis I.” It is both a description of his own fate and a contemplation of the mystery of the past.

Ceci Albert and Lisa Brownsword’s costumes fit in perfectly with the tone of the play. The boys wear jackets and ties, and the teachers suitably austere outfits.  Lighting Designer Jeffrey Scott Auerbach’s work is excellent, and Matthew Scarborough (Sound Design and Vocal Coach) is to be commended not only for the singing of his cast, but for the period music (David Bowie, The Clash, etc.). The music adds a particularly striking undertone of teen angst and longing. Set Design by Kevin King suggests with accuracy and a kind of bleak asceticism the halls of a provincial school.

In this play, the ultimate test of historical “spin” is the Holocaust. Posner’s Jewish parents complain when Irwin mentions that it “should be kept in proportion.” Irwin, to his credit, seems to realize that he went too far.  Rudge quotes French writer Madame de Stael (one of the few women mentioned), to this effect “Tout comprendre c’est tout pardonner.” Posner knows this is not true, and he pays a high price for his quest for knowledge.

Alan Bennett has said he never had a teacher like Irwin or Hector, so he had to invent them. His insights into the life of the mind, as it is lived under unbearable pressure, are unparalleled. As a playwright he is like an old friend, reminding us of truths we had forgotten, and moments of intuition which led us onward to uncertain destinations.

Mind and heart. Both are necessary to education. Alan Bennett, like Hector, reminds us to “pass it on.”

Dominion Stage’s The History Boys is a glorious time in the theatre. Don’t miss it!

The History Boys  plays through January  30 2016 at Dominion Stage performing at Gunston Theater One – 2700 South Lang Street, in Arlington, VA. Purchase your tickets at the door, or online.