If your best friends’ husbands were cheating on them, would you tell them? Or would you tell everyone else? The second installment of EgoPo Classic Theater’s 2015-16 “Season of American Giants II” is a reimagined version of The Women, a scathing comedy of [bad] manners by Clare Boothe Luce, which skewers the deplorable behavior rampant in a circle of New York socialites and social-climbers in the 1930s (her own real-life circle). Sponsored by the Rowan University College of Performing Arts, where the production had a short run a week prior to its Philadelphia opening, and directed by Lane Savadove, who teaches there, the all-female cast combines acclaimed professionals with up-and-coming student majors from the school’s theater department.

Though it’s called The Women, as advertised on the original 1939 movie poster, “It’s all about men!” They are never seen, but they command the women’s world, dominating their thoughts, actions, conversations, and false friendships; the empty female lives revolve around the opposite sex, their money, and their status. Savadove asserts that the unfortunate view of her gender presented by Luce—the last name of her wealthy and powerful husband, who gave her entrée into high society–was meant as a condemnation of marriage and a criticism of the contemporary socio-economic strictures on women. You can judge for yourself if a 21st century feminist deconstruction gives an accurate view of the playwright’s intent, or if it’s more appropriate to consider the play within the context of its own less-enlightened period. Either way, it’s a nasty and cynical portrayal of women that some will find wildly funny, and others will find offensively misogynist.

While the 20th-century stage (1936) and film (1939) period piece presents difficulties, EgoPo’s cast is terrific, performing with over-the-top gusto the dated caricatural stereotypes of women behaving badly, characterized by Luce as doormats and gold-diggers, tramps and bitches, wives, mothers and mistresses, and satirizing with relish their self-indulgent behavior, malicious gossiping, venomous catfights, and ruthless competition for getting and holding onto their man. They never once let us forget that “it’s all about men,” just as their characters are always aware that woman-as-a-rich-husband’s-commodity has an expiration date and will soon be replaced by the latest model.

Mary Lee Bednarek is a stand-out as the vicious and unfaithful gossipmonger Sylvia (Mrs. Fowler), constantly insulting her friends to their faces, dishing out bad advice, and dishing the dirt about them behind their backs. Her haughty flourishes and melodramatic facial expressions are a howl, as she epitomizes “woman’s inhumanity to woman.” Rebecca Joy also delivers a riotously histrionic performance as the pretentious Countess de Lage, four times divorced but always spouting the virtues of “l’amour.” Melanie Julian as the demure and faithful Mary (Mrs. Haines) captures the dilemma of the good wife whose husband has strayed, whom she divorces, and then ultimately fights for with the “dirty female trick” she’s learned from the others. 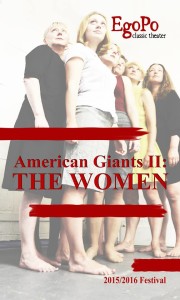 Savadove takes an abstract approach to the show’s design, with a few movable props to suggest the locales (scenic design by Thom Weaver). Representing New York in Act I are tables and chairs, exercise mats, and mirrors (used by the women to check out their physical appearance, instead of self-reflecting on their unacceptable behavior), and trap doors in the stage floor that open to create a bed and a bathtub, while bales of hay indicate the shift in Act II to the divorce center of Reno. Costumes by Rita Squitiere distinguish the wealthy housewives of Manhattan from their servants, their husbands’ nouveau-riche mistresses, and the western cowgirls of Nevada.

Throughout the play, the now-popular trend of expressionist movement, executed by the mostly barefoot ensemble, visually reiterates Luce’s critique of women and commentary on society that is clearly expressed in the writing and acting. The most effective and disturbing visual segments occur at the beginning and end of the production, as Mary’s pubescent daughter Little Mary (played by Rowan sophomore Courtney Bundens) graphically personifies the effects of bad role models, as she transforms from a young innocent girl enveloped in pure white to a boldly sexual woman displaying herself in skimpy seductive attire. EgoPo’s production will give you cause to think about society’s view of women, and women’s view of themselves, both then and now.

Running Time: Two and a half hours, with a ten-minute intermission.