Comedies trading on the mistaken identity theme have been around a long time. Shakespeare’s Twelfth Night comes to mind. And more than two hundred years after that, a fellow named John O’Keeffe penned a clever little piece called Wild Oats, with the same theme. What a delight that the Chesapeake Shakespeare Company decided to share it with Baltimore.

If you read a synopsis of the play, it’s more than a little confusing. So I’ll try to sum it up as succinctly as I can. 1791. England. A guy named Jack Rover is an actor. He meets a guy in his travels and they kinda team up, performing around the countryside. The guy he meets, Dick Buskin, is really Harry Thunder, son of Sir George Thunder. Dad’s niece, Lady Amaranth, is a Quaker. A rich Quaker at that. Dad has the idea that his son should marry his niece. But son Harry has run away from the naval academy and is tramping around with a bunch of actors. So Dad decides to track him down. How Jack comes to impersonate Harry, fall in love with Lady Amaranth, make some discoveries about his own life and pretty much save the day for everybody is what it’s all about.

Director Ian Gallanar has sprinkled this production with a handful of clever devices that are charming to watch. From the announcements at the beginning of each scene that are delivered in over-the-top thespian style to the surprise just before the final bows, he has built a quick-paced, tightly presented take on a 18th century play that might have dragged just a bit for the first few minutes, but then raced along like a well-trained thoroughbred. And it’s funny! With a piece like this, comedic timing is everything and Gallanar’s direction is bright and sure.

Jacy Barber has dressed and coiffed the cast in period-perfect costumes and hair styles. Oddly enough, this is a rare showing when the males are just a little bit better dressed from my point of view. While lovely, I had to wonder if the servant girl and the poor neighbor lady would have been that well-dressed. But it’s hard to find fault with such great style. Daniel O’Brien dresses and lights the stage – complete with a second story balcony – to great effect. The thrust-style stage afforded great views of the action with his well-placed set pieces.

Overall, this is a well-cast show. Standouts in small roles (some actors played more than one) are Daniel Flint, Elliott Kashner, Frank Moorman, and Robby Rose. Each brings a level of expertise that once again proves the old adage that there are no small parts. In featured supporting parts, hats off to Jack Novak (boatswain John Dory), Laura Rocklyn (Jane), Lesley Malin (Amelia), and Matthew Ancarrow (Sim), and especially Gregory Burgess as Ephraim. Talented actors all and I looked forward to seeing them every time they took the stage.

Lizzi Albert is a frothy delight as Lady Amaranth, object of the rogue Jack Rover’s affection. She conveys the big-hearted lady of the manor with grace and excellence. A well-trained actor with an impressive resume, her presence brightens every scene.

Séamus Miller is the foppish Harry Thunder/Dick Buskin. The limber Mr. Miller chews up his scenes like a Doberman with a sirloin. There’s a fine-line between comedy and camp and he treads it with skill.The guy is flat-out funny, and obviously a skilled actor who knows his craft.

Sir George Thunder is played to the hilt by Michael B. Sullivan. This guy holds nothing back in his blustering, blistering portrayal of the seasoned seaman with secrets of his own. As Lady Amaranth’s steward describes him, he is indeed a ‘man of noise.’

Sullivan commands the stage like a commodore, and while he plays a fairly one-note character, he’s totally in that character and brings it to a larger-than-life depiction that plays perfectly.

Vince Eisenson takes on the role of Jack Rover like he was born to it. Lean and lithe, he struts and frets his hours on the stage, drawing the audience’s focus whenever he’s in front of them. He doesn’t have to steal scenes, they are his to give away. Eisenson is blessed with good looks, great command of the throwaway line, and enviable expertise any actor would be proud to possess.

Wild Oats is not widely produced, but that’s only because not enough theatres are aware of just how funny, engaging, and entertaining the play is. Yay for Chesapeake Theatre Company and this production for bringing it to life for Baltimore audiences.

Running Time: Two hours and 15 minutes, and an intermission. 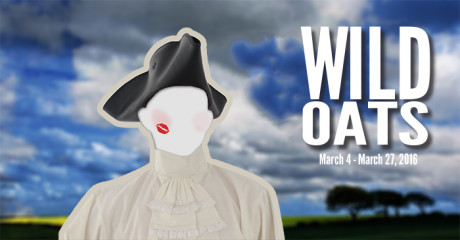