Admittedly, I haven’t been to that many bachelorette parties, and with good reason – Ms. Blozia drinks a little – but the atmosphere at The Naked Magic Show at the Lincoln Theatre on Sunday night felt like a bachelorette party on steroids! Muscly magicians Christopher Wayne and Mike Tyler from Australia aren’t just masters of prestidigitation, but also the fine art of flirtation. At the top of the show they come out in bathrobes which they remove to reveal they’re fully clothed underneath. They tell us this is like a first date and we have to work for it, but if we behave and follow along, then by the end of the night we’ll get to see them naked.

The next act involved a little prediction and some awesome scissor silhouette cutting. An audience member came up and was given a bunch of cards with the names of attractive celebrities on them. The cards were shuffled and one was chosen and not revealed. “Magic” Mike Tyler asked the audience member very generic questions – gender, singer, or actor, while furiously snipping away with a pair of scissors at a folded piece of paper. The card was turned over to reveal Elvis Presley as Mike unfolded a silhouette cut of Elvis.

Ever helpful, the magicians showed us what to do to keep a drunk friend from texting. Using another volunteer from the audience they placed his phone in a sealed envelope along with five other dummy phones in five other envelopes and mixed them up then proceeded to sledgehammer five of the envelopes. Not to worry though, the audience member’s phone was found “safe” inside a condom … inside the backside of a lovedoll. Yes, of course there was a lovedoll on stage affectionately referred to as their assistant.

The next feat involved the entire audience. We all had a red envelope on the arm of our chair when we came in.  e were asked to open them and found four cards:  one of each of the magicians, one rabbit being pulled out of a hat and one of their “assistant.” We were asked to face them away from us and tear them in half and then shuffle the pieces. We were then instructed to take one piece and, without looking at it, hide it somewhere on our persons. We then went through a series of shuffling the pieces and throwing some away until we only had one piece left. Now it worked perfectly for my friend Jen (and most of the audience from what I gathered) that she ended up with the two pieces of the assistant but I ended up with some hybrid of rabbit and assistant. Once again I’ll just say Ms. Blozia drinks a little and may not have followed instructions to the tee.

Another lucky volunteer was chosen for a prediction act and, as a bonus, received a lap dance while Christopher and Mike lost their shirts to much whooping and howling from the audience. 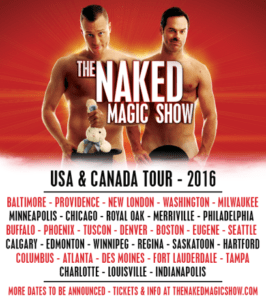 I guess we had been proper first dates then as they performed a straight, and not so straight but more fabulous jacket (brigthtly colored sequin number) escape in their underpants with the promise that the last one to escape would then have to go full monty.

The loser, Christopher, came back with only a top hat to cover himself which he had an audience member hold in place while he performed a rope trick. It was a nice moment of very cool trick combined with the anticipation of would they or would they not drop the hat.

Another card trick with an audience member involved Christopher covering himself with a pinboard and Mike pinning the chosen card to the pinboard with a knife thrown from across stage.

Finally Mike went full monty as well as the magicians ended the show with a very glittery, um, climax!

My only critique, which probably speaks more to my eyesight and where I was sitting, is the show is made up of many, er, intimate moments that don’t always read so well to a large house.

On the whole though, The Naked Magic Show is good naughty fun! Mike and Christopher are both excellent magicians with excellent comic timing and smokin’ hot bodies.

LINK:
‘The Naked Magic Show’ Magicians Christopher Wayne and Mike Tyler Bare it All with Lucrezia by Lucrezia Blozia.