JUICED, directed by and staring the three members of Tia Nina (Leah Curran Moon, Ilana Silverstein, and Lisi Stoessel) is weird. It is ridiculous. It ignores all theatrical and performative convention. Its convulsive, crazy dance tracks are held together in a way that isn’t really a plot. Some might call it obscene (with good reason). And this fact, that it pushes the boundaries of what we define as art, is exactly why you should go see it. 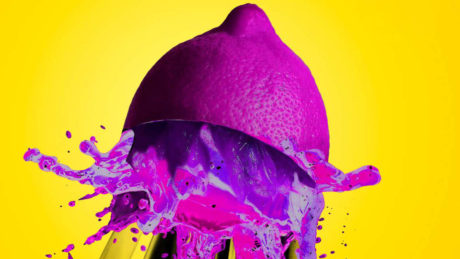 JUICED is hard to summarize (it contains fruit slaughter,wrestling, and fighting and the German language) and hard to really describe. Provocative feels wrong (though the word is applicable as the punk-rock members of Tia Nina aren’t afraid to get political); rather, it is unselfconscious to the extreme. It has a vibrant spontaneity that, while seemingly graceless and rough, infuses much of the performance with a feeling of joy, of unabashed life. The choreography switches back and forth between organic and robotic, fluid, and fractured. And at times the show is punctuated with darker, somber flavors, grief and sadness (and hope), forcing the audience to confront itself; Tia Nina invites viewers to question the steadfast pillars of our society.

JUICED subverts what we think to be “normal” in a beautiful way. It touches upon, nay, embraces sex, gender, play, the human body, savagery, violence, and it critiques everything, even the very nature of itself as an avant-garde feminist performance (in a gloriously meta moment); but it never feels like it takes itself too seriously (until it suddenly, intensely does). In its renunciation of “normalcy,” it uses a host of new tools that rarely reach the stage; its fusion of music (the rockin’ result of composers Michael Moon, Glenn Ricci, and Eric Shimelonis), motion, film and light and images, constitutes a multimedia explosion. And its almost delirious costuming is icing on the cake.

JUICED is brave. It is fun. It is hilarious. It is the kind of thing that makes you disquiet, and that is why it is incredible. If you want something that is challenging, that is new and revolutionary, if you want 4D entertainment of the 23rd century, then see JUICED.

If what you’re looking for is something truly, authentically, and unashamedly Fringe, in every sense of the word, then this is the show you need to see. Because, if nothing else, it will make you think. And that is, I believe, a very noble purpose.

Read the preview of ‘Juiced‘ by Glenn Ricci.