New Game Theatre has created a show to satisfy the matchmaking itch in even your most meddling friend. In Play Cupid the actors relinquish their power and the audience takes control. There was a feeling of palpable excitement as the audience waited for the show to begin. Play Cupid, created and directed by Brett Steven Abelman and devised with the ensemble, puts a fun twist on a choose-your-own-ending plot structure. 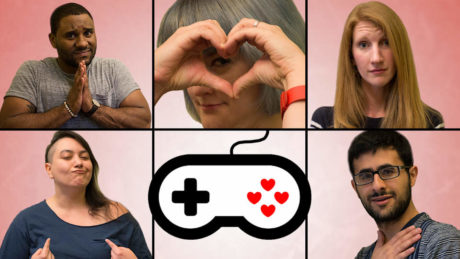 The audience is introduced to five contestants looking for love. Adorned in a lab coat and holding a clipboard, Abelman takes stage to direct the audience in the interrogation of the contestants and the choosing of matches. The rules of the game allow any two members of the cast to be matched together. After deliberation there is a vote, a pair is chosen, and the date begins.

Klenn Harrigan immediately grabs the audience’s sympathy as Jakes, who is new to the dating game. Kara Turner plays Brianna, a PR strategist with more to her than meets the eye. Kyle, gender fluid and strong willed, is played with oompf by Elizabeth Hansen. Niusha Nawab portrays Ali, a DC intern who is just happy to be there. Jessie, the most experienced dater, is played by the fiery Allyson Harkey. With such a range of personalities there are plenty of opportunities for characters to clash and for dates to go wrong. The audience is a character in itself – participation early in the show gives everyone a sense of freedom to throw in their own commentary or ask questions to intentionally throw the actors off.

It is both frustrating and exciting that you cannot see all of the possible pairings in one evening. The stakes of choosing the right match are higher because there is limited time. The one pitfall of this show is that after all the excitement of picking pairs the audience has a hard time accepting their passive role during the actual dates. Some of the pairings clearly don’t have sparks from the start. Others just bicker. Others hit it off right away and then things go downhill. Others are just adorable the whole time. Abelman has brilliantly given the audience veto power, and if a large enough majority of the audience raises their programs during a date, the date ends and the process of choosing a pair begins again. Of course you take the risk of missing an exciting ending.

Arrive with a good sense of humor and an open mind (and leave your kids at home) and in return Play Cupid is sure to provide you with a fun and exciting night. I am tempted to head back to the box office and grab a seat at the next showing. Beware – tickets may go fast.