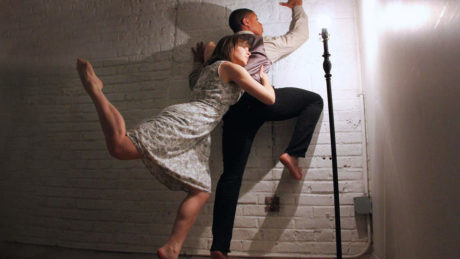 The first two pieces – “Kindred” and “It’s On Her” – tackle illness, physical and mental respectively. Lauren Carnesi’s choreography for “Kindred” smartly utilizes weight-sharing to portray how disease can make the body weak and the community strong in supporting the ill. Sammi Rosenfeld’s “It’s On Her,” however, is the stand out of the concert. An exploration of mental illness, the staccato rhythm in the music and movement envelop the viewer in the fever pitch of mania. Concrete Devotion closes with a featured piece of the same name that follows a couple as they balance shared professional life with the intimacy of their relationship. The choreography is beautiful at moments – two dancers slowly walking away from each other, for instance – but in places retreads its own imagery (without additional impact.)

The ensemble on the whole is strong, but could be more cohesive; there were many moments when the dancers seemed to be out of tune with one another. Christopher Saunders, the only male in the ensemble, was a standout also for his strong solos, including an emotional performance in “Concrete Devotion.”  Otherwise, the ensemble was balanced enough that all dancers could shine.

The technical elements of Concrete Devotion are intriguing and may be one of the central selling points for the performance. Film of the dancers talking about their personal lives, designed by Stephanie L. Dorrycott and projected throughout, gave each live piece emotional roots. The unsettling imagery in the film of dancers lying on their sides on the floor and running along the walls is striking. The puppet designed by Rachel Adler for “It’s on Her” could successfully play a variety of emotions and added depth as a “character.”

Concrete Devotion will transport you to a cerebral place of emotional contemplation. It’s honest expression of sickness, mental illness and relationship trouble could certainly inspire a fulfilling trip to the Fringe bar.