There is an ancient Indian story that tells the tale of blind men unknowingly encountering an elephant. Based on which part of the elephant they touch, each man proposes that the animal is something else. Elephant in the Room, from San Francisco-based physical theater company Right Brain Performancelab, presents a similar experience for audiences. Depending on which part of the performance you relate to most you may walk away with a different understanding of what the piece is about. That ambiguity, and the refined clowning of the performers, makes Elephant in the Room a treat. 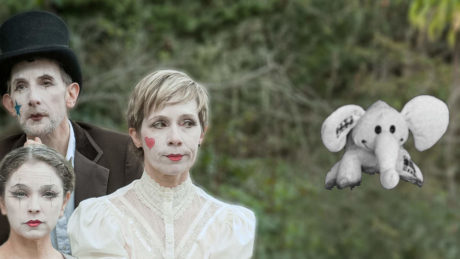 The story is organized around the invisibility of the elephant and a conceit that actors and audience must work together to get the elephant to materialize. Two clowns (Jennifer Gwirtz and John Baumann) conduct and guide the mimed and sung vignettes, all of which allude to the Elephant’s meaning. Sometimes it seems she (the Elephant) symbolizes American apathy. Sometimes it seems she represents the meaning of life. It may be that she stands in for something about the performer and audience relationship. It’s never entirely clear, but seeking out meaning in the vignettes is a fun mental game.

Gwirtz and Baumann have great energy, a quirky sense of humor, and are powerful physical comedians; they’re especially strong in their dealings with the elephant, working together in mime to show the elephant growing and shrinking out of thin air. The pair has been creating experimental physical theater since 1998 and that long-term partnership is clear in their chemistry.

On reflection, it’s amazing that Elephant in the Room uses only one or two props, with no sets. Right Brain Performancelab is brilliantly creative about transforming costume pieces, and their own bodies, into useable props. The world they create with words, music, and movement feels just as full as more traditional theatrical productions. Elephant in the Room adds a healthy scoop of dark philosophy to the typically light fare of clowning.

Elephant in the Room is precisely the kind of show one expects at the Fringe. It’s quirky, and somewhat impenetrable, and the experimental energy is delightful. The performances are professional-grade, but the performers tell you at curtain call that you should find them at the bar. Some may feel around this show and find themselves disappointed, but others will discover they have found just what they were looking for.