Atlantic City came to the Philadelphia area last night and it was a rare treat. Those who primarily know Rebecca Shoemaker and Michael McGeehan from their videos from Caesar’s Palace or their CDs or music videos, finally got to see what all the excitement was about, without the trip to the shore. They were hosted by the Steel River Playhouse, though in Pottstown, actually resembles an attractive, well-equipped Off-Broadway Theater. 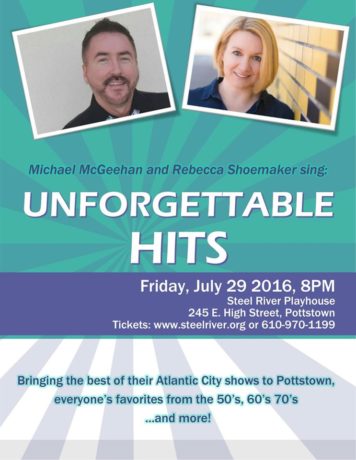 These performers. who perform together and separately, have voices ready for the Great American Songbook. Both have astounding ranges that seem able to encompass anything they attempt. Last night’s show was light-hearted and upbeat.

Entitled Unforgettable Hits, they concentrated on the 50’s, 60’s and 70’s top 40 radio hits. What was staggering was how well they were able to feature pop songs associated with particular performers, (Elvis, Mathis, Mama Cass) and somehow make them their own.  McGeehan doesn’t imitate Elvis, (he’s a little too nightclub in attitude to do that), but somehow the songs score on their own. It’s not Elvis, but it’s unforgettable.

Shoemaker demonstrates the same skill. She segues easily from songs made famous by Diana Ross, Dusty Springfield to Karen Carpenter and Donna Summer. It’s the same voice but the songs are experienced in a new way.  You had to be there to believe it.

Last evening’s show didn’t lack for humor. McGeehan is fond of medleys: “You don’t have to learn all the words to any of them.” He skillfully made fun of the less than lyrical words to “The Twelfth of Never” by “forgetting” the lyrics. His medley of maudlin country songs was hilarious but very, very well sung. Rebecca instructed the audience to “raise your hands if you’ve said this to a man” during “These Boots Are Made for Walkin’” Hundreds of hands went up and down. Who knew?

Rebecca Shoemaker and Michael McGeehan will perform together and separately in Atlantic City and Florida this summer and fall. Keep an eye out for these rare professionals.