Handsome Hound, a local band piloted by twenty-somethings Claire Daviss and Cuchulain Kelly, gives millennials a better name. Self-described as having “roots in folk, rock, pop, Americana, country and bluegrass,” the group radiates a message often out of smartphone reach: positivity. They even have a trumpeter, Allison Rosenberg. Who has a trumpeter anymore? 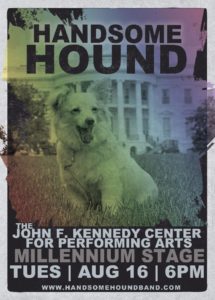 These cool kids do, the ones pulling us away from our backlit screens and back into the light of day. These young professionals are on-stage professionals and they have something to say.

Founded in 2015, Handsome Hound released its debut EP, I Guess We’re Doing All Right, in March 2016. This is a roll the windows down and head-bob song, the one that gets your foot tapping or at least some part of your body besides your text-fatigued thumbs remembering that it moves. “I guess we’re doing all right, for a couple of kids in a mixed-up, crazy world,” they say, with humble uncertainty and just enough ambiguity to be exciting and true to life. Everything isn’t perfect, but would we want it to be? Daviss’ clear soprano and Kelly’s twangy bass tones complement each other, different cars in parallel lanes, traveling toward the same horizon.

To call Handsome Hound a band “getting off its feet” would be to completely short-shrift it. New, yes, but the pieces are together. Theirs is a coordinated operation. They’ve mastered performance (making it all look easy) by honing their respective crafts.

Andrew Northcutt on drums and percussion and Ben Schifman on bass guitar keep it steady, keep the band sounding like—a band. Through almost an entire hour of music, not one transition passed as anything but seamless. No pauses. No faltering—the kind of smooth born from hours of rehearsing.

Daviss and Kelly aren’t afraid to tackle and cover some other great bands either. Their rendition of Jackson, made famous to most by Johnny Cash and June Carter Cash’s rendition, is a respectful ode to those music legends. Handsome Hound’s interpretation stays true to the form most people know, the melody we recognize—a smart way to showcase influence and talent at the same time.

Hannah snaps and sizzles slow-cooked marshmallow style. Daviss called for audience back-up on the chorus (this worked and was not at all cloying). We readily joined in. All that was missing for that song was a fire pit between us. “Hey, hey, hey, Hannah…don’t lose yourself tonight. I know you wanna keep putting up a fight. Hey, hey, hey, Hannah…hey Hannah it’s all right; it’s all right; it’s all right. Don’t lose yourself tonight,” Daviss crooned in her smokier alto range. The lyrics ooze comfort and just the right amount of edgy sadness.

I’ve Been Thinking trickled down like after-rain wind, the kind you lean into when it passes. The performance, a refreshing communal experience, brought the house to near silence. A pin breathed, maybe.

Handsome Hound’s gentle yet poignant voice is a welcome wonder to Washington, D.C. and to its peers, the Twitter followers and Facebook friends, who need to get out more. You may just make a real friend when you attend. Theirs is a happy crew.

Handsome Hound played on August 16, 2016 at The Millennium Stage at the John F. Kennedy Center for the Performing Arts – 2700 F Street, NW, in Washington, D.C. Visit them online for a look at upcoming performances in the DC-Metro area.