“Are you in here?” “Is there anyone here?” “Who are you?” Where are you?” “You’re not supposed to be here.” Spirits of the people who inhabited the Powel House at different periods in its 250-year history simultaneously move through its rooms with an ethereal presence. The unresolved issues of their lives keep them connected to the space, but death has released them from the confines of time. Their paths cross, they re-enact in song, movement, and word momentous scenes and confrontations that plague them through eternity.

Shadow House, a collaboration between the Philadelphia Opera Collective and PhilaLandmarks (the organization that administers the purportedly haunted 18th-century property), is an exquisitely beautiful synthesis of opera, theater, and local history, created by Artist-in-Residence Brenna Geffers in association with the POC. Designed as a site-specific fully immersive choose-your-own-adventure experience, the audience follows ten characters from bygone eras around the home, up and down the staircases, and in and out of rooms, as they engage each other and us with their personal stories, thoughts, and emotions.

Under Geffers visionary direction, the ensemble creates an unearthly tone that transports us to another realm, revisiting and interlocking episodes from the 1780s, 1880s, 1940s, and 1960s. 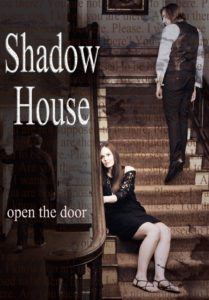 The ghostly presence of the past is evoked through enigmatic whispering and whistling, haunting live and recorded original music composed by Sean Lally, Josh Hartman, Sarah Van Sciver, and Christopher Colucci, and transcendent performances by an out-of-this-world cast–Kayla Grasser, Richard Chan, Brendan Norton, Kirsten Kunkle, Anthony Crosby, Michael A. Lienhard, Maryruth Stine, Crystal Charles, Kristy Joe Slough, and Sean Lally–in vignettes that overlap, reverberate, raise the hair on the back of our necks, and make our nerves tingle.

Among the show’s most affecting pieces are Norton’s use of a Ouija board high up in the attic to conjure a lost soul; Lally’s desperate plea to “Stay Away” (the singer/composer accompanies himself on acoustic guitar); the powerful vocals of POC virtuosi Kunkle and Lienhard (also playing accordion), whose resonant notes echo through the halls; and Grasser’s intimate scene in the second-floor bathroom, where she reveals to a few select members of the audience her intent to commit suicide, because she “can’t hold onto anyone or any time.”

While Shadow House gives new life to people and memories from the past, it will also live on as a part of the rich ongoing history of the Powel House. It will make you reflect on the mysteries of life, death, space, and time, the universal issues we all face across the centuries, and the impact our present actions will have on posterity.

BEST OF THE 2016 PHILADELPHIA FRINGE!