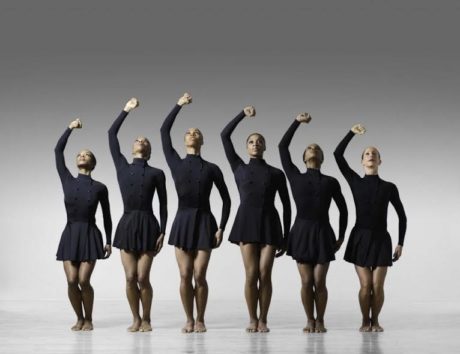 The four ballets presented included, Labess, Hand Singing Song, Between the Lines and Enemy Behind the Gates.  What they have in common are the dancers’ flawless technique and insurmountable energy, a good use of the entire stage, and their connection with African-American culture. Each ballet had its own choreographer and music. I thought the musical choices were extremely diverse for one evening and included music by Zap Mama, an original score by Michael Wimberly, music by Philip Glass and Gidon Kremer, and music by Steve Reich.

All of the music was recorded but each one perfectly fit the choreography and reflected a specific mood. Each dance showcased the dancers’ range. For example, in Between the Lines, choreographed by Francisco Gella, the closest to classical ballet, the dancers wore soft ballet slippers and moved smoothly to Philip Glass’ and Gidon Kremer’s score. The dancers performed pas de deux (partnering), lifts and pirouettes, which come from classical ballet. In Enemy Behind the Gates, choreographed by Christopher Huggins, there is much more influence from modern dance. For example, they utilized three spatial levels: with bodies rolling on the floor, dancing upright with flexed feet, and in the air in jumps and leaps. Non-classical arms (port de bras) were also employed.

Of all the dances, Hand Singing Song, might be the most innovative due to its intrinsic message and sound design. Jawole Willa Jo Zollar choreographed it to Michael Wimberly’s score, and featured ten dancers. It was originally commissioned by the American Dance Festival, and explores African-American hand gestures.Interspersed between instrumental jazz, the spiritual, “He’s Got the Whole World In His Hands,” and the “Hokey Pokey,” we hear narration about the characteristic handshakes and how musicians move.

In one section, the dancers represent the Black Panthers. Dressed in black with black berets, they imitate and stylize the Black Panther’s quasi-military discipline, as well as their greetings. Placed in rows they do sharp percussive movements, and raise their fists. In contrast, when the dancers take off the berets and the men become musicians, their dance and gestures are much more relaxed, with loose shoulders and knees, and uninhibited funky movements all over the stage.

All in all, Philadanco presented an evening of thrilling dance that reflected African-American culture. The concert ended with a standing ovation from the audience and many group bows from the dancers.

BEST OF THE 2016 PHILADELPHIA FRINGE FESTIVAL