Surprisingly little greets the audience as they enter the intimate black box space at the Capitol Hill Arts Workshop where Taffety Punk Theatre Company makes their home. Set, Costume, and Prop Designer Crista Noel Smith provides us a black floor below, hanging wires above, and a smattering of glass bottles filled with sand and water against the back wall. The most notable thing, at first, is the undulating pattern of the seating, which winds forward into the playing space itself and is capped by a small scatter of seats on the opposite side. At this point, it’s completely understandable to ask how on earth Taffety Punk plans to pull off a one-woman version of The Iliad, which already seems difficult even with all types of stage magic that are clearly not on the menu.

Oh, but how misguided that question turns out to be. Because despite the minimalism of the set and the absence of special effects, there is a lot of stage magic in An Iliad, and it comes from its star Esther Williamson.

From the moment she steps into the space until the moment she takes her bow, it is clear that Williamson is in utter command of her instrument. She brings such power, nuance, and humanity to Homer’s epic that it makes you wonder how you ever experienced The Iliad in any other way. Williamson not only rises to the tremendous challenge of recounting the ancient epic solo, she brings a whole new collection of commentaries that make the story fresh and contemporary. Aided only by one half of the “ethereal punk” duo Hand Grenade Job (Beck Levy, at the performance I saw – Levy takes half the performances while her other half, Erin McCarley, takes the rest), who provides a funky musical backdrop to many of the sequences, Williamson heroically shoulders the grand tale like Atlas. The experience is as emotionally satisfying as it is intellectually impressive.

An Iliad was co-adapted by Lisa Peterson, a well known theatre director who is currently the Associate Director at Berkeley Rep, and Denis O’Hare, who gore aficionados will recognize from his creepy roles on True Blood and American Horror Story. It premiered in 2010 and has since played to great acclaim all over the country, including at Studio Theatre in 2013.

High school students should beware of using An Iliad as a SparkNotes version of Homer’s classic; there is ample editorial discretion. And the narrator of An Iliad, called The Poet (Esther Williamson) is far from a detached observer. She tells us that she was there in person to see the epic struggle between the Greek Achilles and the Trojan Hector. She speaks with reverence about King Priam, and outright disgust about his son Paris.

On the one hand, The Poet insinuates that she is firmly located in the Ancient World (“They loved this in Gaul”, she casually mentions). But on the other hand, there is a loose, easy permeability between the ancient and the contemporary. When The Poet describes the coalition of Greeks who came together to rescue Helen from Troy, she uses towns in America as a metaphor (“They came from San Diego, Florida, Flint, Michigan…”).

In one extraordinary sequence, she begins an anecdote about an ancient conflict (“Was it the Persian War? No, the Peloponnesian War?”) that morphs into a cold recitation of just about every global conflict from ancient to modern times, ending with the current Syrian civil war. As The Poet bellows the final word: SYRIAAAAA….. it turns into a primal scream of verse from The Iliad, in its original Greek. It is a powerful reminder that no matter how old the story of The Iliad is, it remains a tale about war, and that means we can still relate to it thousands of years later.

There is a constant tension in An Iliad between the excitement of war and the horror of war. In one particularly notable moment, The Poet describes in brutal detail the testosterone-fueled rush of battle. In another, she seems pensive, almost ashamed of her fiery recollection of the battle. It is this struggle between rage and reflection, between the emotional and the intellectual, that so defines war in any age.

Director Dan Crane reveals a confident guiding hand that allows the wires to hang out – literally. The Poet freely drinks water throughout the show, and Hand Grenade Job does not muffle the sound of its instrumental transitions. In other words, there is a casual transparency at work in An Iliad. It strikes the difficult balance of being both epic and relatable, both energetic and reflective.

Dody DiSanto aided with movement, a critical piece of any one-person show, but especially this one. Esther Williamson utilized her strong physicality to maximum advantage, not so much becoming the characters in the story as becoming the story itself.

Lighting Designer Paul Callahan has created a stunning, saturated landscape that became as much a character as The Poet herself. Hand Grenade Job, in addition to winning points for the best band name ever, is a vital aural supplement that inspires the emotional tone like a Muse.

War is hell. But a war story can be exciting, adventurous, and reveal the strengths and vulnerabilities of its heroes. The Iliad may be mythical, but that doesn’t mean it isn’t true.

Esther Williams and Dane Crane reveal those truths in an engaging fashion that modern audiences can relate to, and doesn’t sacrifice any of the beauty of the original story.

Taffety Punk’s An Iliad is worth far more than the price of admission. 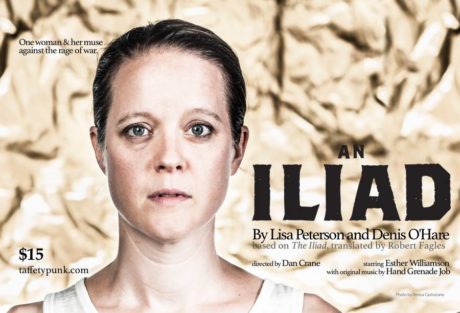 An Iliad plays through October 22, 2016 at Taffety Punk Theatre Company, performing at the Capitol Hill Arts Workshop – 545 7th Street, SE, in Washington, DC. Tickets may be purchased at the door or online.