Citizen Staging Acting Company is a brand new community theatre company that seeks to “enrich and foster the arts” in the Hammonton, NJ area. On October 29, 2016, Founders Tiffany B Travia and Lauren Grasso launched their first production as a spooky riotous affair with Eclipsed: A Masquerade Murder Mystery by Lisa Patrick-Wilkinson, at Frog Rock Golf and Country Club. It proved to be a fantastic premier for this new company.

Eclipsed is an interactive dinner theatre production. The audience is welcomed as the guests of Lord and Lady Moon at the annual “Moonlight Masquerade Charity Gala,” and they transport us right away into their world. We are seated at tables while the characters mingle around us. As we are getting our drinks Lady Moon, played by Terry Ford-Lewis, asks for our attention to make an announcement.

She announces that the highlight of this event is the auctioning of a Tiffany diamond necklace. She also introduces us to the lovely Luna, played by Alana Gallagher, who is mourning the death of her dearly departed husband. And soon the plot starts to unfold around us.

Next, we are introduced to Baron von Kraterfasse, played by James Salvatore, who may or may not be here for nefarious purposes. And we are soon told that Lady Moon’s husband Cress N. Moon, played by Jared Salvatore, is also secretly in attendance. And of course, Matt Lehr as Manfred the butler, is always nearby to serve, or listen in.

After we have eaten, we are told that there is only one problem: the diamond necklace has disappeared. Someone who is at this gala has stolen it. But things take a far more wicked turn as members of the gala start to turn up dead. Could one of the remaining guests be responsible?

And that is when Pam Warner (playing Hattie Quarter) comes in to investigate. She will interrogate every witness to find the culprit. And little did we know when we walked in as audience members that we would be called upon to give clues ourselves.

Cress N Moon points to a woman that he thinks can establish his alibi and Hattie walks straight up a woman eating her dessert and puts a microphone in her hand. An unsuspecting gentleman across the room is recognized as a manager of a hotel that Luna and Cress have frequented and he is brought forward to give an account. And in that manner audience members are drafted to help Hattie solve the murder. But can she solve it? Who is the murderer in our midst?

Lauren Grasso’s direction crafted a lighthearted murder mystery. She kept the high-energy actors moving around and mingling so that we saw them all the time. Dinner theatre is very hard because the play has to be more interesting than the food. By keeping the quick pacing and the jokes coming, and the actors always moving, we were always entertained.

I would have liked to see the director make more use of the “theatre in the round” staging here and in future productions. Too many times, while the audience sat all around the theater, the actors were clumped together.

The cast was filled with some astonishing actors. Alana was our handhold the whole evening and my eyes were on her every moment. From the beginning of the action – when she is moving from person to person – and we are learning who everyone is – it is her high energy that keeps us with her.

The director was very fortunate to find twins in the Salvatore brothers. Both characters had to look exactly alike and move the same way for some sneaky business and misdirection in the show. They also had to have their own identity, so that we didn’t mix them up when they didn’t want us to. Twins that can act are worth their weight in gold.

Matt Lehr, as our butler, was a sleeper hit among the cast. His calm energy onstage made him completely fade into the background when he wanted to. Who is supposed to notice the butler? But when he decides to take center stage – we see an actor who knows what he’s doing, and delivers an outstanding performance.

The best part of the night was Hattie corralling the remaining (or should I say surviving) cast members and using the audience’s help to find the culprit. It is fun to be brought into the story and be a part of this immersive environment.

With the ability to assemble such a talented cast, and to involve the two hundred or so audience members into the action, you’d think that Citizen Staging had been around for a decade. We can expect big things from them in the years to come. 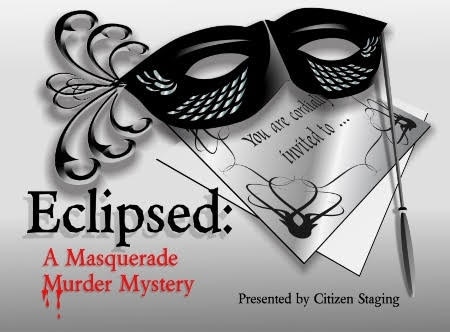 Eclipsed was performed for one-night-only by the Citizen Staging Acting Company at Frog Rock Golf and Country Club. For future performances go to their website.