From the moment the actors appear, the stage becomes a non-stop whirl of color and movement. Howard University’s production of A Midsummer Night’s Dream is set in what is meant to be modern-day New Orleans, but through the music—part 1930s Swing, part 2016 dance club—, the glittering costumes, and the carnival masks whose glowing eyes look down upon the action below, this Mardi Gras madness becomes a world entirely its own. 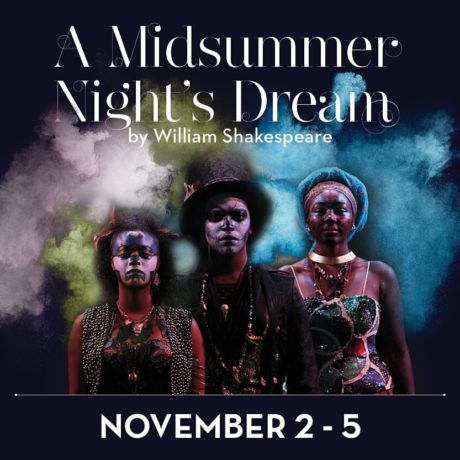 At the top of the play, we are introduced to the characters as they revel in the carnival celebration: first King Theseus and his queen, Hippolyta (Damondre Green and Chinna Palmer) in all their splendor, flanked by loyal Philostrate (Palesa Pryor). We meet the lovers: Hermia and Lysander (Grae King and Kevin Thorne II), who fall in love despite the wishes of Hermia’s mother Egeus (Mary Morris). Demetrius (Austin T. Farrow) is the one who has Egeus’s permission to marry Hermia, but he is pursued with dogged determination by Helena (Kristen Armour). Seeing no way out, Lysander and Hermia attempt to flee to the woods with Helena and Demetrius hot on their heels—not realizing, of course, that they were stepping right into the middle of the Voodoo Kingdom of Oberon (Alric Davis) and his queen (Brittany Turner).

Director Raymond O. Caldwell brings out the laughter, the noise, and the magic in one of Shakespeare’s most famous plays. The actors move across the stage with deceptive ease thanks to choreographer Tiffany Quinn, who imbues the entire play with fluidity—from the raucous dancing celebrations of Mardi Gras to the telepathic control the voodoo practitioners exert over every unlucky mortal who steps into their path.

Oberon’s right hand man is Puck, portrayed by Danielle King with the lightness of foot of someone who is definitely up to no good. She strews discord among the lovers and manages to terrify a group of hapless actors (Adanna Paul, Taryn Wilkerson, Savina Barini, Tehya Merritt, and Deidre Staples), turning their most dedicated member, the puffed-up Nicky Bottom (Alexcia Thompson), into a donkey. With a quarrelling voodoo king and queen in the mix, and a Puck and some priestesses (Brianna Naadira McAdoo, Tysasia Ninngane, Ezinne Elele, and Maiyah Phelps) to play games with, all hell breaks loose, leading to a night of betrayals, tangled love affairs, and utter absurdity.

Set designer Michael Stepowany makes brilliant use of the space by placing the audience on top of the stage, on either side of the performers. This puts the audience right at the heart of the action, allowing us to enjoy the breathtaking swirl of music and movement that is this N’awlins Midsummer.

Costume Designer Kendra Rei’s fantastical creations range from the colorful party gowns to the feathered, sparkling creations and face paint of the voodoo practitioners. Sound designer T.W. Starnes weaves music in throughout this play, bringing to life both the breathless, jazzy reveling of Mardi Gras and, in collaboration with lighting designer Alberto Segararra, the eerie atmosphere of the forest.

Though this play has been performed with every imaginable cast and setting, Howard University’s production still finds new ways to make us laugh at the foibles of human nature it portrays. After 400 years, the Bard still has plenty to tell us.

Running Time: Two hours and 15 minutes, with one 15-minute intermission.