In Part 1 of a series of interviews with the cast of Damascus Theatre Company’s Children of Eden, meet Cheryl J. Campo.

Joel: Where have local theatergoers seen you perform before on our local stages? What roles have you played? 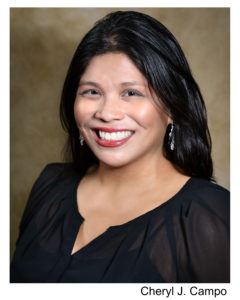 Cheryl: Besides having previously performed with Damascus Theatre Company (DTC), I’ve more recently been in shows with Baltimore Shakespeare Factory, Red Branch Theatre Company, and Memorial Players. Past roles include Abby in Musical of Musicals, Maria in Twelfth Night, Christmas Eve in Avenue Q, and Lady Thiang in The King and I.

Who do you play in Children of Eden, and how are you and your character alike and different?

I play Eve and Mama Noah in Children of Eden. I’m similar to Eve in that we both wonder about and are in awe of the world we live in while muddling through the challenges that ultimately make life full and beautiful. Like both Eve and Mama Noah, I feel intensely about family and figuring out my place in the world. I’m probably more similar to the Eve character as I can be impulsive at times and am not nearly as measured as I imagine Mama Noah to be.

What is Children of Eden about from your character’s point of view?

From both Eve and Mama Noah’s perspectives, Children of Eden is about discovery, finding your way in the world, and making the best of new beginnings.

To prepare for Eve/Mama Noah, I talked through character motivation, particularly in my songs, with our musical director Sam. I met almost weekly with fellow actor Kevin who plays Adam/Noah to review music. Challenges I faced preparing for Eve/Mama Noah included finding experiences in my life to draw on for emotional inspiration and also just balancing everyday work-life demands that affected things like finding time to memorize lines, lyrics, blocking, and choreography.

How did Director Keith Tittermary help you with your challenges and what is the best advice he gave you about playing your role?

Keith is such a gifted artist and professional who is also very accommodating and patient with his actors. He understands that many of us work and have families but at the same time is serious about the craft and everyone working toward his and the creative team’s vision for the show. Keith has actually been very open to letting me find my own interpretation of Eve/Mama Noah and simply reminds me when my vocals need attention or when my emotions aren’t lining up with the action in a given scene.

How would you describe Stephen Schwartz’s score for Children of Eden?

Soaring is the first word that comes to mind when I think about Schwartz’s Children of Eden score. While pensive and thoughtful at times, the music is also uplifting and inspiring.

How would you describe a Stephen Schwartz song?

My description of a Stephen Schwartz song would depend a lot on which one I’d pick as an example but, across the board, everything from the changing time signatures to the intelligent lyrics of all his Children of Eden songs gives a listener so much to take in and think about even after a good listen or two.

Which song that you don’t sing is your favorite and why?

This is a tough question. The music of “Lost in the Wilderness” and “Stranger to the Rain” is so moving but “The Hardest Part of Love” is the one that gets me every time. If you’ve ever struggled with letting go and allowing others to find their way, this song can’t but tug on your heartstrings.

What do we learn about your character when you are singing your solos or duets?

Because there are lots of parallels in this show, both Eve’s and Mama Noah’s songs reveal an optimism about each of them despite their questioning natures. Ultimately, they are both characters of much perseverance and faith.

Why and how is Children of Eden so relevant to today‘s audiences?

Children of Eden is relevant to today’s audiences in so many ways because it touches on universal themes like choice and letting go. By presenting situations where people practice gratitude even in trying times and take action as they can in the face of adversity, Children of Eden transcends what might on the surface appear to be scriptural leanings and instead applies to people of all walks of life.

There are over thirty cast members in this cast. What have rehearsals been like? When did you rehearse your role and songs? What has impressed you most about your fellow cast members and their performances?

This is the biggest show I’ve done with DTC and this cast in particular easily has the largest age range of performers, complete with a number of family pairings (e.g., siblings, parent/child). Because of the large cast size, it can be challenging getting to know everyone. On top of that, rehearsals were broken up in such a way that principals were often grouped together for blocking and solo/ensemble music rehearsals while the entire cast was only called together for the bigger numbers. That said, my fellow cast members from the youngest to oldest have been so wonderful to work with because of their genuine and earnest natures. I’ve seen them look out for each other and help one another out. The people involved with this company and how much they care about what they do is why I keep coming back.

What have you learned most about yourself-the actor-while going through this Children of Eden experience?

While going through the Children of Eden experience, I’ve learned that the process of doing theater certainly gets richer the older I get but that it can also be more challenging, especially when other life “stuff” is being juggled alongside.

What do you want audiences to take with them after seeing you perform in Children of Eden?

After following the characters of Eve and Mama Noah in Children of Eden, I would want audiences to take with them a renewed sense of wonder, gratitude, and/or hope and also to walk away more thoughtful about relationships with family, personal choice and responsibility, and inner strength and perseverance.

Children of Eden plays from November 11th to 20th, 2016, at Damascus Theatre Company performing at Olney Theatre Center – 2001 Olney-Sandy Spring Road, in Olney, MD. Tickets can be purchased at the door or online.