It’s beginning to look a lot like Christmas…but you’d better not finish that sentence within earshot of the Grinch. Because as we all know, the Grinch hates Christmas, as this touring production of How the Grinch Stole Christmas demonstrates, presented this month by the National Theatre. This December, join the citizens of Who-Ville as they appreciate Christmas for what it truly means to them, with or without their presents.

Director Matt August’s production of Dr. Seuss’ classic work starts with a big splash. The Grinch Orchestra, conducted by Adam McDonald, leads with a grand opening number featuring all the denizens of Who-Ville. The Whos are decked out like candy canes in red, pink and white, with clothes that balloon out into all manner of shapes and are decorated with wacky patterns, courtesy of Costume Designer Robert Morgan. Set Designer John Lee Beatty brings Dr. Seuss’s creation to life, with a design inspired by the original illustrations—indeed, the houses, hills, and even some of the food items look like black-and-white illustrations in a book. This idea works well with the central concept of the musical: that the events being seen here are a glimpse into the past, a story narrated by an older version of the Grinch’s dog, Max (Bob Lauder). Old Max reminisces about the days of his youth, even sharing a song with a younger version of himself, played with vigor and great warmth by Andreas Wyder.

Philip Bryan’s Grinch is cantankerous and hates everything the Whos do—especially the singing. But he himself is a bit of a ham, which we see during his show-stopping “One of A Kind,” a song where he glories in his own uniqueness. Aided by designer Pat Collins’ flashy, Broadway-esque lighting scheme and sound effects by Ed Chapman, the Grinch prances and preens to his heart’s content. He hatches his plan to ruin Christmas from the Whos by stealing all their food and presents, content with his place in the world as the hated Grinch…until he meets Cindy-Lou Who (played alternately by Julia Rose DiPiazza and Danielle Guilbot), who seems determined to melt his—and the audience’s—heart. Cindy-Lou is the only one who spares a kind thought for the Grinch, supported reluctantly by her family (Vincent DiPeri, Melissa Weisbach, Brian Rooney, and Barbara Bayes).

In spite of some technical difficulties, including a noticeable malfunction of Young Max’s microphone, the show is a delightful take on Dr. Seuss’s classic children’s story. Because while it may seem to be all about the presents in a production that features no end of visual effects from snowfalls to riding a sleigh down a mountain, it is, in the end, about letting love into one’s life, and accepting someone who is different. This production at the National Theatre is one the whole family can enjoy, and it makes a terrific holiday gift. 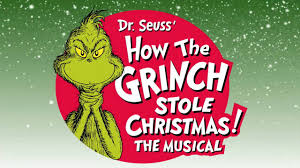