“How could people be so bad that make me feel so good?” That is the rhetorical question posed by white DJ Huey Calhoun, a 9th-grade dropout with an eccentric style, a profound passion for black R&B music, and a mission to have it heard and loved by everyone, everywhere. Set in the segregationist south in the 1950s, Memphis, the Tony Award-winning musical by David Bryan (music and lyrics) and Joe DiPietro (lyrics and book) – based on a concept by George W. George, and inspired in part by the life of Dewey Phillips, a real-life Tennessee disc jockey who was one of the first to introduce black music to white audiences – contains an ebullient message on the power of music to ignite our souls, to create socio-cultural appreciation, understanding, empathy, and love, and to unify people of different races, long separated in our country by an unfathomable history of hatred, oppression, and violence. Ritz Theatre Company’s top-notch production delivers that message loud and clear, with compelling direction, a red-hot cast, exuberant song and dance, and an eye-popping design.

Director Bruce A. Curless strikes an effective balance between the infectious upbeat mood of the music that gave birth to rock-and-roll and the ugly reality of racial prejudice and brutality that challenge Huey’s relationship with Felicia Farrell, a gifted young black singer he meets at her brother Delray’s underground club. Matt Reher as Huey and Vedra Chandler as Felicia lead an exceptional multi-talented company of singers/dancers/actors, backed by a live four-piece band composed of Music Director Lawrence Farmer on keyboard, Sam Davis Jr. on bass, Harry Wilson on guitar, and Derrick Banks on drums.

Reher is irresistible as the irrepressible rebel (“Crazy Little Huey”), determined to forge ahead with his cause, making up words to express his emotions (“Hockadoo!”), and charming his growing followers with his untempered candor and unrestrained love for the music he promotes and the woman who sings it. Chandler is believably pragmatic and strong, and clearly destined for stardom, with her spectacular voice and her personal savvy (“Colored Woman” and “Someday”). Both are fully committed to their roles, convincing in their chemistry, and heartrending in the decisions they must make (“Love Will Stand” and “Memphis Lives in Me”).

A terrific company provides dynamic support for the leads, from the show’s exhilarating opening with “Underground” and Act I’s “Everybody Wants To Be Black” to the lively closing number “Steal Your Rock N’ Roll,” with jubilant harmonies under the vocal direction of Benita Farmer, expert sound design by Matthew Gallagher, and high-energy dancing in the style of the times, choreographed by Arthur Leo Taylor. Among the outstanding featured players are Darryl Thompson Jr. as the protective Delray, whose deep concern for his sister is palpable; Andrew Thompson as Gator, traumatized as a child, but who finds his voice again with the increasing acceptance and popularity of the music; Tasha Waters as Huey’s prejudiced mother, who recognizes that “Change Don’t Come Easy”; and Devon Sinclair as the hilariously understated janitor Bobby, who makes subtle jibes under his breath at the radio station, and then explodes before the TV cameras with high jumps, wide splits, and “Big Love” (the limber long-limbed Sinclair also serves as Dance Captain). Each and every member of the ensemble contributes strong vocals, agile moves, and solid characterizations to the show, with not a weak link among them.

W. Kris Clayton’s set, which Curless uses to full effect, smoothly switches from the club, radio and TV stations, to the streets of Memphis and Huey’s kitchen, with the efficient movement of a brick wall that reverses to a DJ booth. Colorful costumes by Tina Marie Heinz and lighting by Chris Miller add to the visual excitement of the show.

Though the resolutions of the racial tensions of the plot come much more quickly and easily than in our true history, Memphis is an optimistic and uplifting musical that underscores the value of keeping a song in your heart—a moral that is well sung and enthusiastically presented in Ritz Theatre Company’s excellent production.

Running Time: Approximately two hours and 30 minutes, with one intermission. 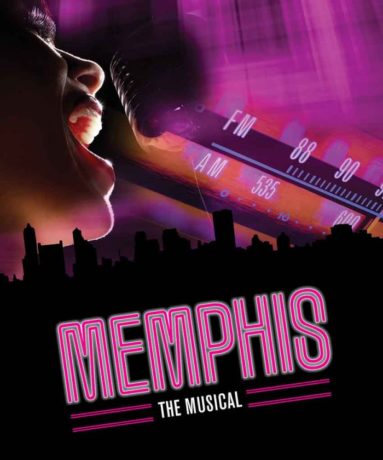