Pop-rock musicals are having a moment. With Dear Evan Hanson ruling on Broadway and Freaky Friday recently debuting at Signature Theatre, fun, upbeat musicals are all the rage.

While lesser known than some of its contemporary musical counterparts, I Love You Because – with a lively score by Joshua Salzman and book and lyrics by Ryan Cunningham – fits right in with these 21st century rock musicals. The show garnered a Drama Desk nomination when it first premiered off-Broadway in 2006.

Damascus Theatre Company brings I Love You Because to the DC metro region for the next two weekends in a production that taps into this energy. With a cast led by four talented young actors and a four-piece band playing from the stage, I Love You Because is charming and humorous with great music and an endearing message: We don’t love people in spite of their faults, but because of them.

Written with a nod to Jane Austen’s Pride and Prejudice (if you paid attention in English class, you will recognize a lot of names), the musical centers on relationships between siblings and combative lovers who engage in glorious feuding only to discover that they just might be perfect for each other after all.

Justin Douds and Katherine Worley lead the cast as mismatched lovers Austin Bennet and Marcy Fitzwilliams. Doud and Worley perform these vocally demanding roles with ease. Douds’ character – a greeting card writer who experiences a traumatic break-up early in the show – is a romantic at heart and Douds does justice to the many emotional songs he delivers. He opens the show with an energetic “Another Saturday Night in New York” and his soaring ballad “Maybe We Just Made Love” near the end of Act I was a show-stopper.

Worley displays equally impressive vocal chops in a variety of solo performances and duets. Worley’s first scene features her character with best friend Diana Bingley (Leah Schwartz) in a laugh-out-loud funny rendition of “The Actuary Song” as Worley and Schwartz use a chalk board to analyze the perfect amount of time to mourn a relationship.

Indeed, relationships, and their ups and downs are at the heart of this show. I came to feel fondly towards all of the characters and watching their interactions certainly had me hearkening back to the ups and downs of my single days. My favorite scene was late in the show when Marcy and Diana nurse their broken hearts over tequila shots (“What Do We Do It For?”) and end up singing their hearts out with the bartenders (Nicki Mazza and Hugh Gordon play the waiters and a variety of humorous character roles.)

While there are no big dance numbers in the show, “What Do We Do It For?” featured some really fun dance moves, as did the tongue-and-cheek number featuring the talented Leah Schwartz as Diana and her “friend with benefits” Jeff (Nick Cox) trying to convince each other that “We’re Just Friends.” The choreography (by assistant director Megan McNellage) and staging throughout the show kept it lively and interesting without being over the top.

Director David Fialkoff clearly helmed a talented tech team. Bill Brown created a modern feeling set through a monochromatic backdrop featuring the New York City skyline. Rick Swink and Vitol Wiacek did an admirable job with lights and sound. I would, however, have liked the orchestra to be a bit more lively at times – Austin’s final number “Goodbye” suffered from a lethargic orchestra.

I Love You Because was written with a lot of short scenes that move from locale to locale which must have left the production team scratching their heads when figuring out how to stage the show. Kudos to everyone involved for the use of the onstage band to minimize the disruptions of these scene changes.

Damascus Theatre Company’s production of I Love You Because features lovely music and brims with playful relationship jokes that anyone who has survived relationship woes can relate to. Perfect for a night out on the town with your bestie or your boo!

Running Time: Two hours and 15 minutes, including a 15-minute intermission. 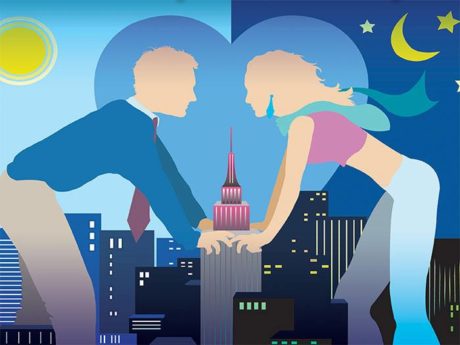 I Love You Because plays weekends through February 26, 2017 at Damascus Theatre Company performing at Kentlands Arts Barn – 311 Kent Square Road, in Gaithersburg, MD. For tickets, call the box office at (301) 258-6394 or go online.