Sinister things are lurking just below the surface at the “2018 Students for Life Conference” in Washington, DC, which is where Madeline Burrows’ disturbing solo show Mom Baby God, about the youth pro-life movement, takes place. Mike Pence is president of the United States and Destinee Grace Ramsey, a video blogger from Columbus, Indiana, Pence’s birthplace, isn’t your typical teenager. She loves pretty clothes and Justin Bieber, but she also idolizes Lila Rose, the notorious young woman who formed a pro-life group at the age of 15 and is famous for going undercover at places like Planned Parenthood. Destinee lives with Mary, proprietor of the Choices for Life Medical Clinic, who she refers to as her “grandmother,” but who actually saved her when her birth mother was on her way to terminate her pregnancy. As the play begins, we learn that Destinee is a finalist for the Lila Grace Rose Scholarship for Professionalism and Purity in the Pro-Life Movement, to be awarded at the “Students for Life Conference.”

Burrows plays all the characters in the piece, which include Destinee, her rival for the scholarship, Makayla, a creepy, overzealous speaker at the conference. In one hilarious bit, Coach Bryan Dwayne demonstrates, with audience participation, how promiscuous women are like packing tape. A feminist, pro-life activist, Mary, and a Bieber-esque singer named John Paul, provide entertainment at the conference, and who is the object of Destinee’s budding affection and sexuality. Burrows seamlessly navigates between the characters, inhabiting them completely without costumes, but only a change in posture and voice. Sarah Tundermann’s lighting design takes us from Indiana to DC, from a teen karaoke party to the interior of Destinee’s mind. 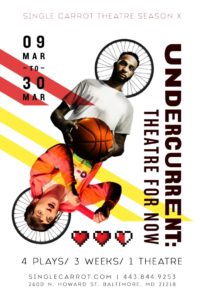 There’s a lot to unpack in the 100-minute running time as Destinee goes through a sexual awakening, far more innocent than she makes it out to be, that becomes her undoing. What struck me most, however, was the notion that these young people, barely teens, become the messengers for a complex movement run by adults, one that they barely understand. In that sense, these kids are as victimized as the woman and girls they purport to help. The other thing Burrows explores that I found troubling is the idea that the pro-life movement is really about giving women choices. But those choices are only supported when they align with the movement. So they really aren’t choices at all.
While the piece is, at times, riotously funny and shocking, I don’t sense that Burrows intends to mock these characters. Rather, I think she wants us to draw our own conclusions, to the extent there can be any, about these very controversial issues. This is heavy stuff, wrapped in the cloak of teen drama. But don’t be fooled. It may seem like bubble gum, but Burrows gives us far more to chew on, and the flavor lingers long after the show is over.

Running Time: One hour and 40 minutes, with no intermission.