The Columbia Figure Skating Club put on its annual spring show at the Columbia Ice Rink last Saturday and Sunday. The theme this year was Sing into Spring with two distinct parts. The first part involved kids skating excerpts from Disney’s Moana, choreographed by founding director Pat Muth. The second part of the show, entitled Faun, included professional skaters and ice dancers from the company The Next Ice Age. Faun was previewed this weekend at the Columbia Ice Rink. 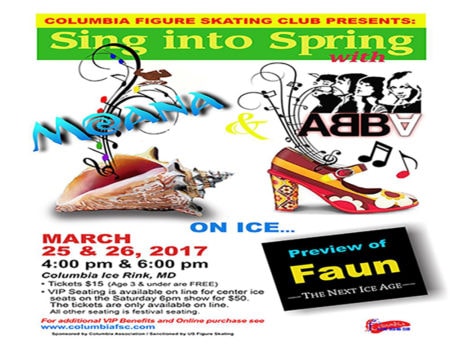 I have been following Nathan Birch (who created Faun,) and The Next Ice Age’s co-founding director Tim Murphy, a coach to Dorothy Hamill and other ice celebrities, for some time now. Critics have raved about the recent work of The Next Ice Age and the choreography of both Nathan Birch and Tim Murphy. Tim’s work on this program included jazzy choreography to music by ABBA for both the professional skaters and teenage students.

“Directing these shows has been a wonderfully rewarding experience,” said Pat Muth at Sunday night’s performance. Muth performed in skating shows as a teen but turned to teaching these skills to disadvantaged kids in 1972 when her family moved to Columbia. She takes a lot of pride in the success of past ice shows, especially since they have launched many former students into professional careers in theater, dance, and, of course, ice-skating.

Pat Muth’s daughter, Martha Muth, recently succumbed to Cancer. She will be missed by the gang at the Columbia Ice Rink and the members of The Next Ice Age.

Choreographed by Birch and set to the haunting Debussy Prelude a l’apres-midi d’un faune, Faun is reminiscent of the modern dance by Vaslav Nijinsky for the Ballet Russe. Birch’s interpretation follows the poem by Stephane Mallarme where the young faun meets the nymphs, flirts with them and chases them. While I never saw Nijinsky dance the role, I remember well when Rudolf Nureyev captured the Wolf Trap audience with his sensual interpretation in the Joffrey Ballet production many years ago.

Birch wisely chose 26-year-old Ian Lorello to perform the faun in this ice ballet, and he captured both Nureyev’s feral gestures and John Curry’s cool moves on the ice. Birch, an award-winning skater who turned to balletic choreography, has left his mark on many ice dances since forming the professional company in 1988. I love the way his dancers effortlessly move across the ice, changing directions at a whim, and never ending up where you would expect. Nymph skaters Julia Choi and Alicia Jackson (called the Avatars in this ice ballet) showcased the ease of modern dance with the skills of skating. Can’t wait to see this company in a full concert for the 30th anniversary season.

The Next Ice Age’s performance of Faun played for two nights only on March 25 and 26, 2017 at The Columbia Figure Skating Club – 5876 Thunder Hill Road, in Columbia, MD. For tickets to future events, go online.

OTHER OPPORTUNITIES TO SEE THE NEXT ICE AGE AND OTHER COLUMBIA AREA FIGURE SKATERS INCLUDE:

The Next Ice Age will return to the Carousel Hotel in Ocean City, MD for a summer residency. The shows are free and open to the public.

The Columbia Figure Skating Club presents The Nutcracker on Ice two weekends in December. Tickets sell quickly; call 410-730-0322 or go online. Don’t forget to bring a warm snuggly for the little ones to keep away the ice chills! 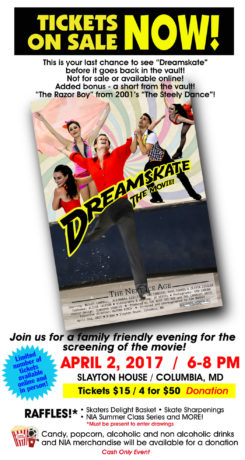