Compass Rose Theater’s production of the George Bernard Shaw classic Pygmalion is an entertaining, thought-provoking show. Directed by Jim Knipple, it combines great acting with a clever set and interesting costumes to have audiences laughing and, at the same time, thinking about the issues of class, gender, and, in this version, race. Both Eliza and her father are played by African Americans, which adds a new dimension to their roles.

The play has been transplanted to 1960s England, with touches of the appropriate fashion, design, and art, but the characters and story are still the same. The two lead actors give remarkable range to their roles. Cameron McNary plays Henry Higgins as an eternal bachelor, always slightly disheveled and oblivious to good manners. All nervous excitement at the chance to test out his experiment, he blurts out completely inappropriate remarks to the guests, getting many laughs. Watching him trying to step over a pair of slippers is hilarious.

McNary can be funny, but he can also play Higgins as shockingly rude and sexist. Contemptuously dismissive of Eliza (Mariea Terrell) at first, he barks at her, ordering her to sit down. He frequently calls her a “guttersnipe” and worse. For most of one scene, while she talks to other people, he pouts and keeps his arms crossed. At one point, in a fit of rage, he nearly lays hands on Eliza. He is only a gentleman by birth, not by temperament or breeding.

Mariea Terrell gives a complex performance as Eliza Doolittle. Fearful and deferential at first, she trembles on literally running into Higgins. But at the same time she’s also assertive, sharply rebuffing Higgins’ bad behavior. She has a curious mixture of fear and determination that makes for compelling watching.

Her most powerful performance comes near the end, when she gives voice to her anger and confusion in a piercing howl. She lets loose her feelings and stands her ground against Higgins. She shows her power, chasing him around the room and jabbing her finger in his chest. It’s a remarkable show of vulnerability and strength.

James Bunzli plays Colonel Pickering with a combination gentleness and oblivion. In many ways he’s what Higgins could be, extremely eager for the experiment to work but even at his most absent minded treats Eliza with dignity and respect. His conversations with Higgins are full of pleasure, two men talking about their favorite subjects, oblivious to anything else. His finest performance comes when speaking to Eliza, and apologizing for her poor treatment. It’s also one of the play’s most heartfelt moments.

Janet C. Preston gives grace and humor to the role of Mrs. Higgins, Henry’s mother. Her response to hearing of her son’s experiment is both charming and scathing, trying to explain to him the practical difficulties. Her outburst of frustration at his not understanding is both funny and completely understandable. During her party, she gives a hilarious expression as Eliza’s story mystifies her guests. Later, she takes control, grabbing Henry’s arm and explaining the situation. She plays a strong woman, composed in the face of absurdity.

E. Martin Ealy plays Mr. Doolittle, Eliza’s father, with a quiet confidence. He speaks to Higgins as an equal, sure that he’ll get what he wants from him. He gives a hint of violence when speaking with Eliza, though, raising his fist to her and recommends giving her “a good strap”.

Isabel Messina shows great talent as Clara Hill. When she first appears, she’s rather imperious and insufferable, stamping her foot in impatience and demanding results. Later, she’s charming and composed, with a slight rebellious streak. Listening to Eliza’s racy story, she picks up a few phrases, to big laughs. She’s sure to have a great career ahead of her.

Omar A. Said and Rebecca Dreyfuss play Freddy and Mrs. Hill as genteel members of polite society. They respond to Eliza’s story with laughter, and casually reply to Henry’s outbursts as though he were speaking normally. Their quiet performances help to play against McNary and Terrell’s more dramatic, different performances.

Renee Vergauwen’s outfits reflect each character’s class and personality. Higgins starts with a multi colored bow tie, white shirt, button down sweater, and khaki pants; later he has a long, askew tie. Eliza begins with black boots, a multi colored skirt and a red top, with a black sports jacket and a bonnet. She later wears a sparkly yellow evening gown, with white gloves, and a tiara. More casually, she has a short yellow dress and a white women’s tie. Mr. Higgins starts with a wrinkled grey suit, and a shredded vest; he later changes to an elegant suit and top hat.

Sound Designer Matt Lehtoh does a great job with the music. While for the most part remaining in the background, it is distinctly of the 60s, helping to add to the period flavor.

The props by Joann and Mike Gidos are well done, helping set the atmosphere. Higgins’ home has a small desk with an old fashioned radio, a cart with equipment on it, and modern chairs. Mrs. Higgins’ home looks more comfortable, with a long sofa, coffee table, dining chairs, and a small desk.

Marianne Meadows’ lighting has the lights fade between each act, and they shift with the mood. It softens during the comic scenes, and gets brighter for the more emotional ones.

Vocal Coach Janel Miley has done fone work with the cast. Terrell changes her accent from the lower class Cockney, slang heavy and a little difficult to understand at the start, to the more polished, refined middle/upper class one by the end, clear and distinctive.

Director Jim Knipple hasa great cast to wok with. The actors have all great chemistry with each other, all the humorous lines hit their marks, and the emotional scenes feel genuine. All the elements come together for a show that has plenty of laughs, as well as questions to think about. Compass Rose Theater made a great choice to end their 2016-17 season. Be sure to catch it! 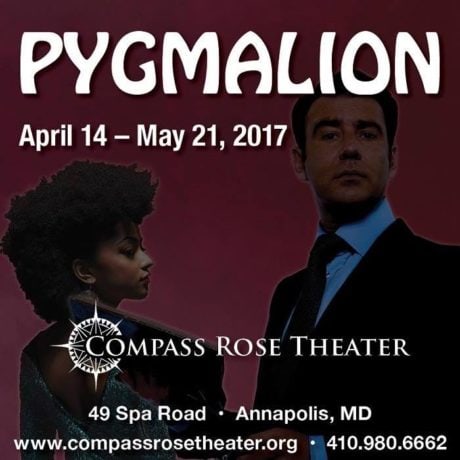