John Guare’s masterpiece from 1990 solidly launched his career, earning a run of 155 performances off-Broadway which extended to a run at the Beaumont Theatre on Broadway of 485 additional showings. His later works include the Critics Circle Award winner.

he book to the musical Two Gentlemen of Verona, and the screenplay for Louis Malle’s Atlantic City, among many others. They add up to a rich full life from the mind and heart of a gifted playwright who is also the founding editor of the Lincoln Center Theater Review and a most involved member of the Dramatists’ Guild.

It’s only fitting that this early play of his should have a New York revival, but how fortunate we are that it’s been delivered to us at the Barrymore Theatre by a top drawer group of artists, all of them at the top of their form. For starters, Allison Janney has had enough awards to fill a large shelf, including four Emmy Awards in five seasons on TV’s The West Wing. She’s now playing Ouisa Kittredge, the Upper East Side matron who is connected by six degrees to Corey Hawkins’ Paul. Mr. Hawkins, a Julliard graduate, was acknowledged as the student with “exceptional ability in classical theatre.” He brings us a protagonist of enormous vitality, charm, and charisma — one who has no trouble wrapping his tongue around the most devilishly clever dialogue John Guare has ever committed to paper.

We get to know Paul better as the 90 minute one-act play unfurls, and his early beginnings as someone else are fascinating to observe. His is a performance of size and scope that is, in a word, dazzling. Completing the trio of central characters who give shape to this story, John Benjamin Hickey adds beautifully to his long list of theatrical outings, including a Tony for The Normal Heart and an OBIE for Love! Valor! Compassion! He perfectly partners with Ms. Janney as the husband in a marriage seemingly made in heaven, but we will learn once again that things are seldom what they seem.

The rest of the company is filled with colorful actors like Lisa Emery, Ned Eisenberg, Michael Countryman, and a slew of bombastic youngsters who bring to life the yearnings and frustrations of a new generation as they implode on the periphery of their elders’ lives.

This need of Ouisa Kittredge to fully experience Paul’s intrusion into her life is undeniable and must be dealt with. A stranger enters the NY apartment she shares with her husband, Flan, and pours out a complicated tale of how and why he is there that is accepted by Flan; but that causes a deeper connection with Ouisa. That connection is the line we follow throughout the play. Her journey and the knowledge she acquires about herself and the intruder are what involve us sufficiently to allow for a bissful catharsis by the final curtain.

The symbolism of the two Wassili Kandinsky paintings suspended back-to-back above an elegant New York living room is clear and potent. The simple eloquence of Ms. Janney’s final moment is haunting, and I will see it in my mind’s eye along with such other cherished moments from performances, some of which are to me over 50 years old. This is intelligent, thought provoking theatre — rich and full of the full spectrum of human behavior and understanding.

Trip Cullman’s direction has fully harvested the writing and the acting by calling on many contradictory styles. His introduction of the four youngsters, representing the enormous generational differences between them and their parents, is original and most effective. Daniel Swee’s usual keen eye as casting director has brought us always interesting choices in performance. Here are a group of talented artists who all seem to have had a singular vision, and audiences will be the beneficiaries of their fine collective work. 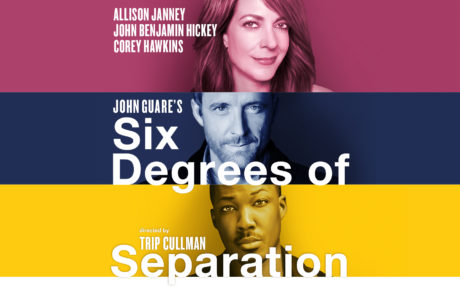