Massacre. Bloodbath. Horror. These are just a few of the terms used to describe the absolute tragedy that took place on April 20, 1999 in Jefferson County, Colorado. The terrible events that took place in the halls and rooms of Columbine High School were ones that everyone in the country during that time will never forget. The actions that the two boys, Eric and Dylan, took against their peers made history and taught a lesson; although it may not have been the one the pair had intended. Stephen Karam and PJ Paparelli’s narrative play columbinus puts into the public eye the question of why these two went through with this malicious deed.

The story of columbinus is written from a combination of interviews and recordings of real people involved in the Columbine shooting. They turn these characters into stereotypes to portray the classic perspective on how others view and relate to these real people. These characters include: Prep (Jackson Miller), AP or Advanced Placement (Joshua Mutterperl), Perfect (Hallie Friedman), Jock (Chad Vann), Rebel (Bridgette Saverine), Faith (Madison Hite), Freak/Eric (Danny Waldman) and Loner/Dylan (Brian Perry).

Every one of the members of this cast had a connection with one another. Whether that bond be positive or negative varied, but each one of these characters had a story that was developed in depth by the actors that portrayed them and they stuck to it throughout the show. The unity and sense of an ensemble that was given off from the group showed audience members that they knew every action they made and every risk they took was to add to the story told. 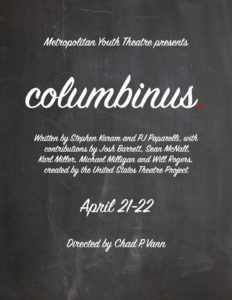 Although the script itself is already written in a stylized manner, the director of Metropolitan Youth Theatre’s production, Chad Vann, who also plays Jock in the show, took it to a new level. Despite the creative level being raised, the story was told in almost perfect fashion. The uniformity of which the actors moved and spoke presented the months of work that the cast and crew put in into making sure this important story was told and told correctly. With a message of this caliber, everything that they did had to be precise and with purpose and the show was performed just like that.

The main goal that the cast and director wanted to articulate to those who viewed this production was to have the audience leave and ask themselves questions. Questions on how they treated others, how they treated themselves and how their actions and choices may affect those around them. The performance they gave sent a message to society on what may happen if we make these choices again.