Adultery, the trespass that has fascinated human beings through the ages, offers many emotional highs and lows. There is the desire that overwhelms all reason. There is the joy of stealing about, narrowly escaping being found out. And there is the sadness and guilt knowing that people you love will soon to be grievously wounded. Harold Pinter should know. While married to a famous actress, and star of many of his plays, he conducted two clandestine affairs with prominent women. The resulting play, Betrayal, is now considered a modern classic, and students new to the deceptive trickery of Pinter are usually urged to discover Betrayal first and then venture into the hidden malice of The Birthday Party or The Homecoming, or the linguistic wonders of No Man’s Land.

Emma and Robert have been married for many years and have two children. Emma begins an affair with their married best friend Jerry, and this intrigue continues for many years. Emma and Jerry imagine that their intimacy is well hidden, but the betrayed Robert (who is himself having affairs) discovers the truth and chooses to exact revenge through subtle machinations. Pinter’s skill never allows this to descend into soap opera. The story is told in reverse, beginning with the lovers meeting after a two-year separation. They are stiff and uncommunicative. The scenes then move backward in time as the affair heats up and heads to its passionate beginning. This is a daunting achievement, but Pinter’s exploration of the lying, self-deception, cruelty and pure lust that is involved make for scintillating and subtle theater. As a playwright, Pinter is better known for what is unsaid, the great subtext in those famed pauses.

This has always challenged American actors. Generally speaking, they like to wear their hearts on their sleeves, experiencing every emotion to the fullest, while Brits depict a “British reserve” in which emotion and passion are covered over with a layer of quiet reticence. (The English are just a passionate as anyone, but they don’t like to show it.) Pinter’s famous use of subtext means that every line and pause is filled with double, even triple meanings.

Director-designer Robert Bauer’s set and costumes are variations of white and grey. The undecorated set and utilitarian clothing are appropriate but make no statement about the play or characters; they merely drift into the background. Kim Pelle’s straightforward lighting contributes to this functionality.

Marc C. Johnson (Jerry), Kellie Cooper (Emma) and Dante Zappala (Robert) make game attempts at the London accents that are so indispensable to Pinter plays. Their performances display that British reserve, but at the expense of the passion, which needs to be conveyed in the subtext, the chinks in the “armour,” to be persuasive. Director Bauer has the couples kiss, hold hands and occasionally embrace, but the fire that will eventually destroy them is missing. The actors need to bring that fire; without it, they are not convincing as either lovers or friends.

Famous moments, such as the Venice scene where Robert taunts Emma with many sardonic tricks to drive her to honesty, are flat and uneventful. The memorable scene where the two friends meet in a pub to destroy each other while desperately needing to remain best friends – passes quickly as well. The scenes are all similarly paced, robbing the evening of its forward moving structure of eventuality.

Is it possible that there is true fire and lust underneath the reserve? Betrayal runs for one more weekend. Hopefully it will be found. 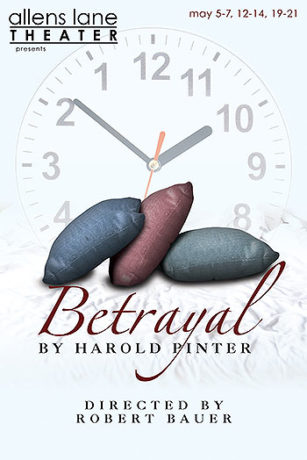