New Records is a new column that discusses recordings of theatrical shows. It’s a companion to the theater reviews that appear here on DC Theater Arts.

This week, in connection with the Tony Awards, let’s take a look at albums from three of the most accomplished productions of the season: Dear Evan Hansen, Come From Away, and Falsettos. 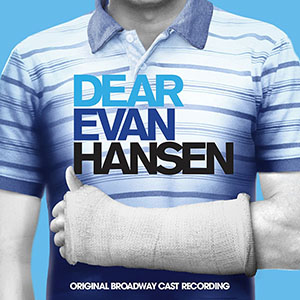 When Benj Pasek was a high school student at Friends’ Central School in Philadelphia, one of his schoolmates committed suicide and the community rallied in support for the dead child’s family. Remembering that incident, Pasek devised the plot for Dear Evan Hansen. He and his writing partner, Justin Paul, wrote words and music. They had crafted the 2012 Off-Broadway musical Dogfight, elevating a tawdry story to intense emotional resonance. Their A Christmas Story was a more conventional show, and now, with Dear Evan Hansen, they’ve reached artistic maturity.

The title character is a socially anxious high school senior who was acquainted with a surly classmate named Connor who, midway in Act I, commits suicide. A letter is found, addressed “Dear Evan Hansen” and signed “Me” which everyone assumes to be the suicide’s farewell message. Actually, it was a letter written by Evan to himself as a positive attempt at self-assurance.

Evan has been almost friendless, terrified about what others will think of him. Now everyone sympathizes with him because he supposedly lost his best friend; Connor’s parents embrace Evan as if he were family, and support groups make Evan their poster boy. The teenager accepts credit for a relationship that never existed, and exploits it, while he is internally torn.

Pasek & Paul’s score captures the apprehensive personality of the teenager, and Ben Platt (only age 22) is superb, his voice soaring on spectacular high notes while trembling during his introspective thoughts. In “Waving Through a Window” Evan describes his insecurity: “I’ve learned to slam on the brake / Before I even turn the key / Before I make the mistake / Before I lead with the worst of me.”

He continues, defining his anxiety: “Can anybody see, is anybody waving back at me?” / When you’re falling in a forest and there’s nobody around / Do you ever really crash, or even make a sound?” Sometimes, intentionally, his voice seems to crack and Platt shifts into a higher pitch, reminding us that he’s playing the role of an adolescent whose voice has only recently changed.

In “For Forever,” Platt sings about his imagined friendship with Connor: “Two friends on a perfect day / We could be alright for forever this way.” Here, and in other songs, Platt makes us feel for his confused character. Some of the songs are gentle, some are rollicking. All have an appealing pop/rock flavor, with an occasional similarity to Paul Simon.

The orchestrations and conducting by Alex Lacamoire, who did the same for Hamilton, are brilliant. Many of Evans’s songs start softly with only a keyboard accompaniment, later joined by an acoustic guitar. After that, percussion sneaks in, then strings, then all fade away until we’re left with the young man alone. 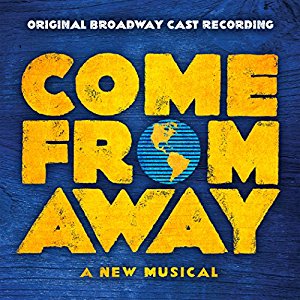 Come From Away (The Musical Company)

Dear Evan Hansen is one of the few Broadway musicals that are original creations, not based on a previous book, play or movie. By coincidence, another original story also made an impressive debut this season. It’s a musical that concerns 9/11.

Really? Seems like an odd topic for song and dance.

Actually, Come From Away is more of a 9/12 or 9/13 musical, telling us what happened in the days following the terrorist attacks. It focuses on the true happenings in Gander, Newfoundland, a tiny town that doubled in population when it welcomed thousands of stranded passengers after air travel was shut down on September 11, 2001. Hundreds of planes were ordered to land at Gander, where the residents greeted travelers warmly, saying to the strangers: “Here’s a key to my house. I put out fresh towels and there’s food in the refrigerator for you.”

The inspiring book and score of Come From Away are by the Canadian married couple Irene Sankoff and David Hein, making their Broadway debut. They capture the culture of Newfoundland which, apparently, is strongly influenced by Irish music. The folky flavor dominates the opening song, “Welcome To The Rock,” and most of what follows. Ian Eisendrath leads an eight-person band which deserves special mention.

A standout in the score is “Me And The Sky,” a traditional Broadway-style ballad for Jen Colella, playing a Texan pilot who actually was American Airlines’ first woman captain. Q. Smith as the mother of a New York firefighter impressively sings “I Am Here,” and Joel Hatch as the mayor of Gander, sturdily leads many of the numbers. Most songs are for ensemble singing, with a cast of twelve giving us vignettes of dozens of characters.

The recurrent bluegrass/Irish music definitely is catchy but, without the action on stage in front of us, some of it is repetitious. The book is my favorite among all the musicals of the year, but the music by itself is not as impressive. 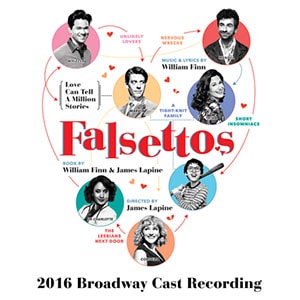 Lincoln Center’s revival of Falsettos by William Finn was produced early in the 2016-17 season. Although this is a treasure of musical theater, it never previously had a complete recording. That unusual situation arose because the musical started as a one-acter titled March of the Falsettos in 1981. The protagonist was an articulate, neurotic, funny, gay Jewish man named Marvin, who leaves his wife for another man, and has to deal with the confusion that it causes in his son who is preparing for a bar mitzvah. Finn wrote the lyrics and music. DRG recorded the score.

Nine years later, Finn continued the story of Marvin and his extended family in the one-act Falsettoland, which was recorded by DRG. In 1981 Michael Rupert played Marvin, Stephen Bogardus was his lover Whizzer, Chip Zien was his analyst and Alison Fraser was his wife Trina. In the 1990 sequel, the men remained the same but Faith Prince was the wife.

In 1992 Finn, with director James Lapine, combined the two to make the two-act Broadway hit Falsettos which included a new song for Trina in Act One, “I’m Breaking Down.” DRG reissued the two earlier discs, but Trina’s big number went unrecorded. Record company executives told me that the cost of inserting a new song would be prohibitive.

The complete 2016 production is now immortalized. Christian Borle is the new Marvin, Andrew Rannells is Whizzer, Stephanie J. Block is Trina and Brandon Uranowitz is Mendel the shrink.

Finn’s music is distinctive in the way he combines word play, metric surprises and unpredictable line-lengths with direct, emotional melody. His subject matter was revolutionary. For the first time, a musical-theater songwriter wrote about gays and about contemporary Jews — not just long ago and faraway Jews as in Fiddler, but urban American Jews of today. In addition, they were people with Jewish lives, like Finn himself, wrestling with the meaning of bar mitzvah and the existence of God.

Borle is tender as Marvin, while Rannells is defiant as Whizzer, who contracts AIDS before the disease has a name. They blend beautifully when they sing “Unlikely Lovers” and Borle tears your heart out when he sings “What Would I Do?” (“Once I was told that good men get better with age. / We’re just gonna skip that stage.”)

Block nails her big lament that ends with the exclamation, “The only thing that’s breaking up is my family / But me, I’m breaking down.” Young Anthony Rosenthal is the bar mitzvah boy, Jason, who complains that “My father’s a homo” then progresses to begging God to “make my friend [his dad’s lover] stop dying.”

Although the men of the original production were definitive in their roles, the new cast cannot be faulted in any way, and they have created a gorgeous recording. Tracie Thoms and Betsy Wolfe complete the cast as “the lesbians next door.” Vadim Feichtner leads what’s referred to as “our teeny tiny band” — serving as a reinforcement of the idea that these unconventional lovers are a tiny segment of the population — in a Michael Starobin orchestration.