These three words appear often in Paul Osborn’s classic Morning’s at Seven, now on view at Old Academy Players in East Falls. This play has become a staple of regional and community theaters, as it offers brilliant comic/serious roles for mature performers.

The story is Chekhovian in structure. There are four sisters and three husbands who live in close proximity in a small Midwestern town. One sister is an “old maid” (this is 1938) who lives with one of the couples, and there is also a 40-year-old son and his fiancée/girlfriend. The three words mentioned above figure powerfully in the interactions.

First some history: Osborn’s play opened on Broadway in 1938 in a production directed by Joshua Logan starring Dorothy Gish. Critics dismissed the comedy as too cute for words and the play closed a few weeks later. Morning’s at Seven was then ignored for decades until a regional production transferred to Broadway in 1980, with a cast performing with such depth of character and feeling that the word “cute” was forgotten. Since then, the play is often revived and is now considered an American classic.

The “quaint” quality is still apparent in the Old Academy Players production, but the experienced cast, directed by Loretta Lucy Miller, is well on the way to the required complexity.

Osborn’s writing gives ample time in the spotlight to each of the cast members. Best of all are the always excellent Susan Blair, as Arie, the sharp-tongued unmarried sister who never found a man good enough for her, and Jennifer Sivers-Roberts as the pathetic girlfriend, Myrtle. Blair nails the humor in the first act and the tragedy of loneliness in the second, while Sivers-Roberts effectively agonizes as she embodies the plight of the neglected girlfriend of twelve years.

Linda Palmarozza brings laughs as the oldest sister, Effie, whose husband banishes her to the upper floor of their mansion for the crime of visiting friends and relatives. Susan Triggiani captures the pain of Cora, who is forced to share her living space with a younger and thoughtless sister. Her husband Thor (Rich Geller) is a lovable if dim fellow, while Mike Mogar suffers panic attacks as a husband who wishes he’d taken a different fork in the road of life. 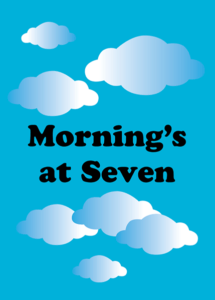 Lawrence H. Geller is appropriately supercilious as the fired college professor who feels everyone is a moron. And while Kimberly Hess (as Ida, the loyal wife whose husband is contemplating leaving her for a roommate) and Robert Toczek (as Homer, the conflicted son) don’t quite deliver comedic star turns, they are well on the way. Director Miller has proven herself a strong director in past productions, so this one should grow nicely.

Set designer Scott Killinger succeeds in the unhappy task of cramming two backyards onto a shoebox stage. Osborn was a typical ’30s writer and imagined all of his plays on a Broadway size platform. The limited playing area creates problems for the director, who really needs a good deal of space to stage the play. Jane Jennings’ costumes epitomize the period and the characters, and the lighting by Jesse Friedman, Carla Childs, and Sarah Labov effectively illuminates the differences between evening and morning.

The humor in Morning’s at Seven can’t help but feel a bit twee at times. Still, Old Academy Players’ production boasts some fine performances, and the deeper the performances get, the better they will be.

Running Time: Two hours and 20 minutes, with an intermission.