They’re back! Second City–the group that made Chicago the capital of comedy and that all but invented improv–has returned to DC, where it is part of The Kennedy Center’s month-long second annual  District of Comedy Festival.

The show, billed as The Second City’s Almost Accurate Guide to America: Divided We Stand, is neither as sharp nor as political as its predecessors, which is understandable. It’s easier to find humor in an improbable candidacy than in an unpredictable, and decidedly unfunny, presidency.

Yet Divided We Stand delivers enough laughter to lighten the sultriest evening, thanks to its talented ensemble of writer-actors and a creative team that knows how to magnify a joke.

There are skits about gender identity, online dating, pussy snatching (one of the few references to the recent election), an ongoing threat of a North Korean missile attack and racial ambiguity.

Angela Alise opens the show with a wonderful depiction of ‘Black Heaven.’ A strong actor and singer, she is both funny and moving as she plays a young woman on a first date. Chucho Perez is perfect as the bumbling suitor armed with conversation cards.

Ross Taylor does a wonderful turn as a man from Montana, Tyler Davis is hilarious as an aggressive waiter and Ryan Asher is the ultimate ‘girl named he’ in a number of gender-bending roles.

One of the funniest skits is about a TV talk show, on which Katie Kershaw plays the blowsy–and bewigged–lady author of some 50-odd books.

There is only one improv routine in this production. On the night I attended, the unlikely  audience member was a 15-year-old who enjoyed being the center of attention.

Improv aside, the real star of the show is Billy Bungeroth, who directs the entire enterprise and plays the disembodied voice of a character named Boris. William Collins is the stage manager who keeps everything moving briskly.

Lighting and sound play a major role in this production, with Colin K. Bills, Julie B. Nichols and Dane Halvorson providing the illusion of action through the use, respectively, of strobe lights and back lights, sound and music.  Izumi Inaba has produced an intriguing array of costumes, with elegant suits for two of the men and a range of tell-tale outfits for the rest.

Cast members occasionally pop up in the audience, adding to the sense of informality in the small but well-lit Theater Lab on the upper level of The Kennedy Center.

Divided We Stand is nothing if not well-timed. It is good summer entertainment–breezy, light, and just silly enough to make most of us forget the real divisions and threats that surround us.

Running Time: Approximately two hours and 15 minutes, including one intermission. 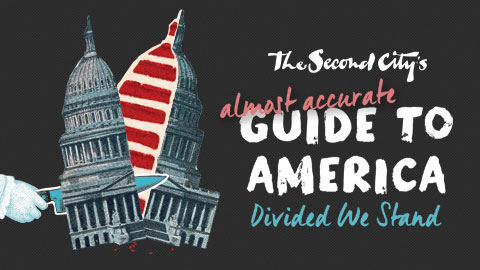