Shards of unseen, but sharply-felt shattered glass, both of a collapsing marriage and the infamous Kristallnacht (Night of Crystal), are fused together in Arthur Miller’s Broken Glass, now playing at Theater J. It is a satisfying evening with an unyielding, rarely-revived drama because of a fine compelling cast under the strong clear direction of Aaron Posner.

The evening will be especially appealing for those interested in a rarely-revived Miller drama that wrestles with dreams for a more enlightened world. It was written well after his masterpieces of theater made him a cultural touchstone, late in his illustrious career. It was first performed in 1994 and was last seen in the DC area about two decades ago. 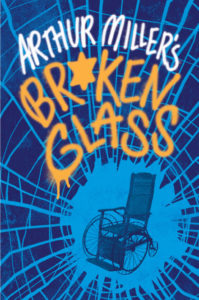 Lise Bruneau movingly portrays Sylvia – a woman who exists in a nightmare of a crumbling, dead marriage – with such authority that I easily felt her pain and loneliness as authentic. Her later moments of action and courage in the production appear as realistic.

Marriage and life have taken a toll on Sylvia. But she is by no means blameless, as she has humiliated her husband early in their marriage. Sylvia suffers from a baffling medical condition: she is unable to walk or feel below her waist. Is it some kind of hysteria as she becomes more and more obsessed with what is happening to Jews in Germany? Is there a connection between the two events, thousands of miles apart? Is Sylvia’s physical condition a mental health reaction to her unhappy, stressful marriage?

Her husband, Philip, is a tense, tightly-wound, self-loathing Jewish man. Paul Morella portrays the stressed, anxious man ready to explode at the slightest provocation. He is like a lithium battery about to violently burn, harming himself and others.

Broken Glass takes us on a journey like a medical detective procedural to find answers to what really caused Sylvia’s debilitating condition. Sylvia’s symptoms are discussed, analyzed, and diagnoses suggested. In parallel, conditions of German Jews under the rising Nazi power are also discussed and analyzed; Sylvia is like a Greek Chorus of one, sending out warnings that no one wants to hear.

Those who Miller enlists on the journey for answers includes a “hero” – a family doctor who seems a wonder of decency with an interesting ritual habit of riding a horse down Ocean Parkway in Brooklyn to make it through his day. Oh, and he is also a bit of a womanizer. Played by Gregory Linington, the doctor is a man with a quick smile and somewhat open mind, but plenty of flaws.

The doctor’s insightful, cleared-eye wife is played by Kimberly Gilbert who, in a dandy performance, provides not only a distinct “objective” perspective to the proceedings, but adds amusing comic relief, as well. Also notable are Stephen Patrick Martin, playing Philip’s boss – a banker who has suffered a loss of his own, and Michele Osherow, who portray Sylvia’s solid, decent-to-the-core sister, who serves as a lovely, unclouded voice for a family’s usually-unspoken, deep history and dynamics.

Broken Glass does feel soft at times as Miller’s script is just so damn direct. But, then as the production nears its final scenes, it picks up energy, power and plenty of flawless, layered work from the principals. The production becomes a maelstrom about facing the worst life can bring upon people. The final fade is not easy to bear witness.

Andrew Cohen’s Broken Glass set is a minimalist one – chairs and tables that serve their purpose. Moving projections are made into over a dozen frames at the rear of the set, showing world events in the late 1930’s. The projections were developed by Mark Costello from rarely-available images from stories in American newspapers. These were made available through a unique collaboration with the United States Holocaust Memorial Museum.

Tyler Gunther’s costume design was a wealth of period specific clothes. Lighting design by Harold F. Burgess II and Justine Schmitz’s sound design added textures to what could have easily been a visually static production. And applause are due for the scene changes in Broken Glass. They were more than mere brown-outs. Instead, there were projections of cellist Udi Bar-David while his recorded, mournful music connected the scenes.

Miller has his doctor say what he wants the audience to truly hear. Whether it resonates in these current days of identity politics and world tumult is anyone’s guess.

“I have all kinds coming into my office, and there’s not one of them who one way or another is not persecuted. Yes. Everybody’s persecuted… sometimes I wonder, maybe that’s what holds this country together! And what’s really amazing is that you can’t find anybody who’s persecuting anyone else.”

Running time: Approximately two hours and 20 minutes, including one intermission.