Four Broke Guys: LIVE! is classified as a comedy, but don’t expect mere fluff or pratfalls from this one-man show. Actor and playwright J. Shawn Durham’s sequence of four monologues from four separate characters is funny, but it can turn on a dime from darkly witty to mournful to self-aggrandizing. It’s Durham’s emotional range that gives this play of limited scope a heart. 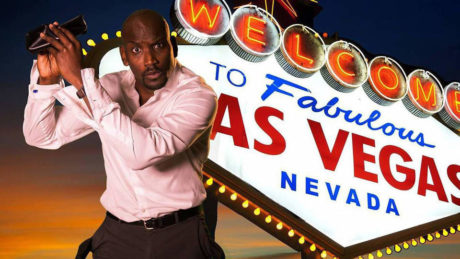 Durham inhabits the personae of Carlos, a young father fighting with his girlfriend; Oscar, who’s jobless but once had a promising career; Daniel, a college football player turned security guard; and Gent, who got out of rural Mississippi but is still burdened by family tragedy. All these characters are broke, yes, but what truly ties them together is that they’re breaking down. They’re men of color who struggle to get by in environments that don’t let them succeed. Instead of acknowledging any of that, though, they blame their emotional collapse on the women in their lives.

A short video serves as a preface for each monologue. This is an excellent way to make use of the projector screen in the otherwise spare basement performance space of Shopkeepers. Unlike the live sections, the videos feature multiple actors, so they also do some heavy lifting for characterization. We see Carlos struggling to connect with his girlfriend and her friends at a bar. Later, we watch a stellar take on a silent film in which Oscar tries to ask out a woman in a park, but then realizes he has no money to buy her a drink. The production quality is high (kudos to Jose Moris Productions), although sometimes it’s hard to tell what the point of a given video is until halfway through the following monologue.

Other than the videos, Four Broke Guys doesn’t have elaborate staging. Durham uses a prop or two in each scene and changes costume pieces to signal different characters. Ally Perry plays a waitress in the first scene and a one-night stand in the third, but these characters are little more than props themselves, meant to bring out the men’s moments of hypocrisy and cruelty. The show is about Durham’s four characters, so Director Tony Richard wisely puts all other elements on the back burner. That’s frustrating at times due to the script’s scope: since the monologues are short, we only see each man in the moment of his breakdown. We don’t see him changing for better or worse.

But Durham’s irrepressible energy makes the show engaging. He plays the small audience like a stand-up comedian, making direct eye contact with every audience member, and he paces back and forth in a frisson of nerves. (Durham’s stamina is impressive, and his spot-on physical comedy never wavers.) He ad-libs like a stand-up comic, too. The opening night audience was mostly white, a fact Durham pointed out several times. “By the demographics of this crowd, I can see that you all don’t get what I mean when I talk about the African-American cobra,” he said as Carlos, when the crowd was silent after he described his girlfriend’s threatening shoulder roll. We laughed, but it was an uncomfortable laughter. We didn’t know what he was talking about.

That’s what Four Broke Guys does brilliantly; it forces us to see Carlos, Oscar, Daniel, and Gent as black men who are wry but misogynistic, capable of deep love but gloomy. In other words, they’re fully-formed characters. At the end of the play, Durham explains that his purpose in writing and performing the show is to demonstrate that black men are human, despite whatever flaws they may have. His message, delivered in a social climate that often ignores this idea, couldn’t be more timely.

There’s plenty to be fine-tuned in Four Broke Guys. Scene transitions take too long, while the sound cues don’t have the same quality as the sound in the videos. And the characters’ emotions sometimes change too fast, as when Daniel goes from high and relaxed to a weeping wreck in seconds. But as a showcase for Durham’s talents, and as a reminder that imperfect black men are just as capable of feeling pain as the imperfect white men who usually attain play protagonist status, Four Broke Guys does exactly what it sets out to do.