Described as “D.C.’s only all-original political satirical musical comedy troupe,” Hexagon gives a musical zing to the political madness of the past year. Now in its 62nd year, Hexagon brings its unique brand of original music and sketch comedy to Fringe, lampooning politicians, popular culture, and even the D.C. Metro. And the best part? Hexagon is an all-volunteer organization that historically donates its proceeds to different charities each year. 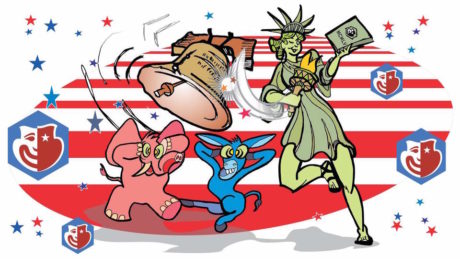 Directed by Jennifer Strand, the show featured original songs such as Rick Horowitz and Walter Gilbert’s “Drill, Baby!” (an ode to fracking), and returning songs such as Richard Present’s “Love My Phone,” a satire of our unhealthy obsession with technology performed by the rib-crackingly funny Nick Bashour.

Highlights include a delightful trio arrangement of Kathy Meyer Jeffers and Walter Gilbert’s “Fox News Foxes” – about what little girls dream about growing up to be someday. One of the standouts is the company’s performance of Doug Maurer’s “Brown Water Blues,” a powerful soul/blues take on the water situation in Flint. Karen Zill’s sketch “Mother Goose for the Trump Era” uses nursery rhymes and fragments of children’s songs to skewer politicians and current events… in rhyme, of course. This is one of the more effective sketches, with others such as “WLUV” and “Under Development” needing more work on timing.

Washingtonians will particularly appreciate Jeffers’s and Gilbert’s “Train Wreck,” which perfectly captures the struggles of riding the D.C. Metro – “We’re going to ride the metro… and hope that we come out alive!” And with all the political and pop culture parody, there is “The Bubble” – a song about the white middle class saving the world “one 5k at a time.” It’s a great reminder that, for all our noble ideas about the way the world works, most of us don’t move far beyond our own comfortable circles of like-minded people. The irony of a group of mainly white, middle class performers satirizing politics from a fairly unified perspective is not lost on this song.

Lighting Designer Peter Caress and Projections Designer Matthew Mills work together to create the set, a mixture of atmosphere-specific light changes and projections that highlight particular songs. Sound Designer Matthew Datcher keeps the show moving during the many transitions between sketches and songs.

The show is not perfect: Music Director Deidre Gyr Turshen’s work includes some excellent numbers, and some numbers that could use some extra precision work. And Teri Allred’s choreography, visible and enjoyable in numbers such as “G’Bye, G’Bye,” could have made more of an appearance in other songs, some of which seemed too static. But as an all-volunteer group writing clever songs and having fun with the show, the joy that Hexagon puts into their work is apparent. As Hexagon points out, laughing is healthy… and laughing while donating to charity is even better.

Running Time: 60 minutes, with no intermission