Teresa of Avila, the patron saint of headaches, illnesses, and the sick, is best known in religious history for establishing an offshoot of the Carmelite Order – the “Barefoot Carmelites” – which promoted a life focused on intense contemplation, poverty, and prayer.

In real-life, Teresa riled the locals when she and her order arrived in Avila. Their embrace of absolute poverty as a way of showing devotion to their God and their faith was considered too extreme, and her frank discussion of sex and temptation didn’t sit too well with everyone either. Fourteen years after Teresa’s “Barefoot Carmelites” were established, they were brought before the Spanish Inquisition. Teresa was allowed to retire to one of the monasteries she founded and the charges against her friends were eventually dropped.

Gallo’s play focuses on what led Teresa to leave the Order to establish her own branch of Carmelites, and the subsequent defense of her beliefs to her Inquisitors. On his website, Gallo explains: “Teresa is about a determined feminist mystic, one of the most brilliant and liberated women of all time. She jokes, tricks, deceives, manipulates, bribes, strategizes, lies and triumphs… [She] is at odds with the Church hierarchy: nuns, King Philip, the civil authorities, members of the Inquisition, the Grand Inquisitor, God, and some say all the angels and saints. And she outsmarts them all with her cunning, sly tongue, sheer brilliance, skillful adaptation, humility, arrogance, and craziness.”

This firebrand of a woman is portrayed to perfection by Emily Canavan, in a star-turn after appearing this June in Thunderous Productions’ Murder on the Nile at GAC. As Teresa, she is exceptional, masterfully fluctuating between her character’s strength as a woman and her perceived weakness as a “sinner” (for admitting she *gasp* struggles sometimes with lustful thoughts). Her voice quivers with both fear and triumph and she lends a sweet honesty to the role that feels natural. Watching Canavan feels like this is what Teresa could have been like.

This is a small(ish), but incredibly talented, cast. Steve Rosenthal makes a fantastic “villain” out of Bishop Lopez, a man shocked by Teresa’s words and actions and who hides a tragic secret of his own. George Spencer and Rod Ross are great as Friar Antonio and Bishop Pedro, respectively. Grant Bagley deftly plays triple-duty as one of Teresa’s confessors and then later as her Inquisitor. He also brings a humorous and warm take to the Voice of God that speaks to Teresa throughout the second act.

Beatrix Whitehall shines in dual roles, as well. As the director of the play, she handles a gifted cast beautifully; she also appears in the production as Eufrasia, a noblewoman who initially dislikes Teresa with a passion, but really isn’t one to talk given her “mistress” status in the court.

James McDaniel has some of the play’s best comedic moments as an oblivious King Philip, who refuses to lift a finger to help Teresa (but secretly is her biggest fan). Samuel Simon, as Benjamin, delivers a heartfelt ode to the “scandalous” nun. He’s joined by the sisters that make up the rest of Teresa’s convent: Margaret Bagley as Sister Maria and Renate Wallenberg as Sister Olga. High-school junior Hazel Thurston delivers a standout performance, perfectly encapsulating what one would expect out of a Novice Nun.

Tommy Zanner and Jeff Robert did a great job with lighting and sound, respectively. No costumer or set designer was credited, but Penny Martin was a wonderful stage manager, deftly sweeping into the dark to make quick, subtle changes in the perfect silence that every technician knows and appreciates.

The worst thing I can say about Teresa is that there’s not enough of the good stuff. At times, the writing can seem more like a history recitation or sermon, but more often than not there are moments when the actors exhibit such raw emotions that you’re left wanting more. I wish they all had been given more time to chew on these scenes.

Teresa is a fast-moving play that features an incredibly talented cast that really gels together. The simple lighting, sound, and sets allow audiences to focus on these fantastic performances, especially from Emily Canavan. Her take on this iconic historical figure is not to be missed! 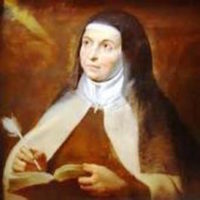