Is the mysterious Mora truly the “homicidal mermaid” that the eccentric denizens of an old seaside resort town think she is, or does she just play one in the local boardwalk attraction? While on leave, Johnny, a lonely and ingenuous sailor in the US Navy, encounters the strangely fascinating woman with an abnormal attraction to the water and becomes instantly smitten. Despite repeated warnings about the deaths of her two previous boyfriends and the sound advice he is given to stay away from her, he maintains his devotion at the likely risk of his own life, and eventually learns the hard way that compulsive behavior and delusional fantasies are not all that healthy.

Luis Villabon directs with a fine satirical eye on the weirdness of the characters, the absurdities of the dialogue, and the inexplicable plot points of Harrington’s spooky tale – the most incomprehensible of which are cleverly addressed in the conclusion of Tash’s comical adaptation. A cast of eight embraces the fun, with hilarious characterizations of the quirky figures and side-splitting send-ups of the generally bad acting in the low-budget movie.

Patrick Dunn and Tara Martinez star as the bizarre couple Johnny and Mora, delivering the idiosyncratic personalities and powerful vocals of the naïve wannabe hero (expressed in “Save the Girl”) and the distant but seductive wannabe-or-maybe-is mermaid (whose proclivities are professed in her show-stopping rendition of “Night Tide”). Martinez is absolutely uproarious in her unexpected transitions in temperament and non-sequitur lines that perfectly parody the movie’s mostly flat but sometimes inconsistently melodramatic performance (e.g, she immediately follows her impassioned delivery of the title song with the impassive question to Johnny, “You don’t find me strange, do you?”). Her split-second timing and blunted affect are priceless.

Supporting actors Rebecca Hoodwin as the wacky fortune-teller Madame Romanovitch, Rick Roemer as Mora’s volatile guardian and creepy sideshow proprietor Captain Murdoch, and Charly Dannis as the carousel-operator Ellen – an awkward young woman who is “Crushed” by Johnny’s disinterest in her obvious advances and concerned that he will be, too, by his attraction to Mora – contribute to the overall zaniness of the show.

Rounding out the enthusiastic cast are Kissy Simmons and Ya Han Chang as the Sirens Stormy and Rocky, and the terrific Josh Sassanella as Odd Sam. They serve as a Pop-culture Greek chorus, offering their comments to Johnny and randomly breaking out in harmonious song and synchronized dance to silly Sixties-style numbers reminiscent of a vintage Frankie Avalon and Annette Funicello beach-genre flick (the animated trio’s “Get Off the Beach” and “Witch of the Water” are especially rollicking, as is the authentic doo-wop of “Summertime Fling”).

Spot-on choreography by Villabon captures the exuberant go-go moves of the era, and Andy Peterson provides his ever-masterful music direction and arrangements, with stylings that range from the ensemble’s swinging Pop tunes to the leads’ blockbuster Broadway ballads, all skillfully performed by a robust six-piece band (David Salter on guitar, Billy Smollen on bass, Derek Swink on drums, Luke Meyer on woodwinds, E. Zoe Hassman on cello, and Peterson on keyboards and conducting). David Starr’s set of movable panels with scenes of the boardwalk, ocean, and full moon in the night sky transport us to the beach, and costumes by Jessa-Raye Court and lighting by Chris Steckel recall the colorful fashions and bright hues popular in the mid-20th century.

If you’re looking for a fun-filled two hours of retro laughs, music, dance, and design, Night Time fits the bill and provides a delightfully witty take-off on its eponymous source.

Running Time: One hour and 50 minutes, including an intermission. 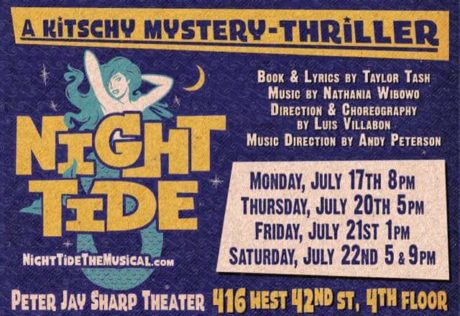