Catching Up With Atomic Doll Productions! 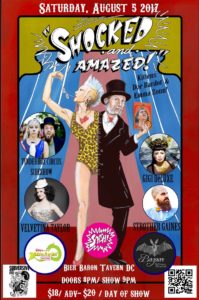 We’re not great, I guess, is what I’m saying – and yet it’s that tension between success and failure that sideshow acts depend on. We need to believe that something can go terribly wrong for us to feel that the show has gone gruesomely right.

Atomic Doll Productions is unveiling a new evening of astonishing freak and side-show acts, as well as a jigger or two of burlesque sex appeal on Saturday, August 5, at the Bier Baron Tavern.

The show, Atomic Doll Productions Presents: Shocked and Amazed!, will set audiences up for “an unparalleled look into the world of Sideshow and Variety Arts.” Step right up, folks, for such amazing feats as:

It’s the “and more!” that has always been a promise of side-show acts and freak-shows. It’s that “and more!” that taps into the part of us that still believes in monsters and wants to be thrilled.

I was able to catch up with Alex Doll, Tinderbox Circus Sideshow, and Strother Gaines – some of the performers of Shocked and Amazed – to get up to speed on what’s in store on Saturday. 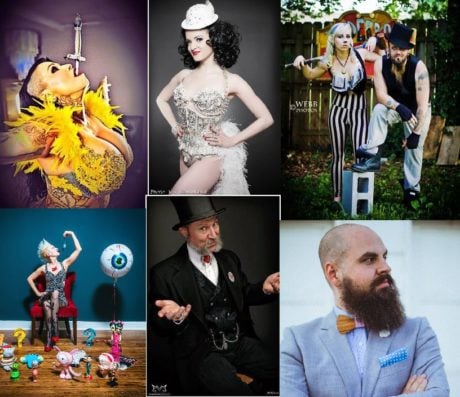 Mike Bevel: Please tell our readers how you ended up being a weirdo on stage.

Alex Doll (producer): I started as a carnival sideshow documentarian over a decade ago, researching a book I was working on in the field. My first intro to the business side of things came from my introduction to Erik Sprague (The Lizardman) by way of Josh Burdette (former security at the 9:30 Club in DC, and all around amazing human). Erik and Josh had been friends on the body modification forums, and in real life, as Erik made his transition into the green guy he is today. Josh thought it would be instrumental, based on the subject matter I was probing at the time, if we met. I ended up discussing my project with him in the basement bar of the 9:30 Club after he wrapped his hosting duties of that night’s Jagermeister Tour event.

After a while, my writing began to feel empty when describing an experience – like what it would feel like lying on a bed of nails, or pushing sharp needles through one’s dermis – that I had ZERO frame of reference for. This feeling happened to coincide with an annual Sideshow Gathering in Wilkes Barre, PA, where Todd Robbins (Former Headmaster at Coney Island Sideshow School) put out the call for Human Blockheads to take the stage and form the largest gathering of blockheads on record. I learned how to hammer a nail into my face that day. Since then, I have eaten razor blades, lain on a bed of nails and pierced my skin more times than I can count, dabbled in fire, and the list goes on.

Strother Gaines: Alex asked me to. But seriously folks, I’ve been a performer all of my life and I guess I just like exploring all the elements of that, fringe, middle, and freak.

Tinderbox: There’s absolutely a huge separation between our stage personae and “real life” us. While we aren’t necessarily [playing] characters, on stage we are dialed up to 11. We are chill and quiet and (generally) nice people off stage. Our onstage life is the opposite end of the “phone voice” spectrum: it’s coming from the same people, but it’s a whole lot louder.

Strother: I think it’s more about what part of me am I highlighting in this moment. When I have on heels and I’m futzing around in drag, I’m gonna swish a bit more than I do when I’m giving a speech at a government conference… but just a bit.

I think it’s possible for people to be authentically themselves and still have different facets to their personality (sometimes wildly different facets) and we get to decide which one we share with which people and when. Just because you get the business me now doesn’t mean you won’t get the drag me later or the socially awkward me immediately following. (In fact you’re probably most likely to get socially awkward me… I will always be that chubby, awkward middle schooler somewhere deep down.)

What is your “we’re done here” question? By which I mean, you’re at a party, someone says, “Oh, this is that friend I was telling you about!” And then someone else asks you the dumbest question about your job where you think, “That’ll do, pig.” And then you pretend to take a phone call and peace out of that interaction.

Tinderbox: When someone asks, “Why would you do that to yourself?” or “Doesn’t that hurt?” We’re pretty much finished.

[I scratch out the “Doesn’t that hurt?” question. Feel seen in a targeted way.]

Tinderbox: Especially when they tag on the super misogynistic “But you’re so pretty!” to Kayti (Miss Trashique) or Kathryn (Devereaux); the conversation is over, we’re moving on.

Alex Doll: What Tinderbox said, AND when people are generally disrespectful of my fellow performers in the industry with their line of questioning (think: rude, intentionally baiting, or otherwise insensitive). This business is so crazy diverse with the type of talent that will take the stage that any sideshow event runs the gamut of possibility for encountering anyone from a bearded lady to Sealo the Seal Boy. Whenever people conflate difference with inhumanity and are not interested in learning otherwise, that’s when I decide they are no longer worth my time or patience.

What do you think audiences are responding to the most in your performances? Is it that sort of unwholesome wish we all have of seeing something going wrong? (For instance, I was in Toronto recently, in that building with the glass floor, and saw so many people sort of run and jump on it. Like, really slam down. And I thought, “But what is the end-game here, people if, Hashem forbid, you crack that glass and plummet to your death?” Like, is it that you want to see the glass fail? Or is it the thrill of knowing it won’t?)

Tinderbox: Optimistically, we like to think that the audience is responding about 50 percent amazement at us not killing ourselves, and 50 percent laughter at our sense of humor. Realistically, that percentage is probably off, due to a hefty percentage of wanting to see something go horribly, horribly wrong.

Alex Doll: There was a study on the psychological term for someone without suicidal ideations or feelings wanting to jump off a bridge, called the “high place phenomenon.”  The study had the best title, and I think it summarizes what many of the danger acts in this industry represent to audiences everywhere. It was called “An Urge to Jump Affirms the to Urge to Live.”  James Taylor often tells me—

James Taylor often tells me the best end to any story about an experience is   the phrase “…and we lived!”  It is because whatever preceded that, you have to imagine, was a story about existing on the edge, with all sorts of risk entailed.  In my opinion, that’s living done right, but it’s not for everyone. That’s why we let audiences live safely and vicariously through us, and hey, we aren’t complaining; it’s what perpetuates the industry and pays the bills.

What is your dream feat? What’s at the top of your list of skills to develop?

Tinderbox: We all come from different points of view on what our dream feat would be. Kayti/Miss Trashique longs to become a strong-woman. Kathryn/Devereaux Dollface dreams of acrobatic balancing acts. Zak/Captain Darron actually achieved his dream feat earlier this year when he finally learned to swallow swords. Now his attention has shifted to trick-knife-throwing.

Strother: I would love to learn to do aerials of some sort. I took an acro-yoga class or two and loved it, so anything with that acrobatic spin would be amazing. Also, can I ever learn to twerk? I doubt it.

If you could be haunted by any ghost of a side-show/freak performer of the past, who would it be and are you actually already being haunted as it is?

Strother: Probably Fedor Jeftichew or Jo Jo the Dog Faced Boy. I really like beards and Annette Funicello, so there ya go.

[Editor’s Note: Mike Bevel has a very convincing story about seeing the ghost of a dog-faced man when he was in his 20s in Ashland, Oregon, so (a) the proof is out there, and (b) he will tell this story with little to no encouraging.]

Tinderbox: We avoid being haunted by ghosts of sideshow past by giving praise to Melvin Burkhart, Patron Saint of goofy weirdos, at every show. We like to think that he looks down on us from the bally stage in the sky and protects us from taking anything too seriously, and guides us on the path of never growing up.

Alex Doll: I think it would be funny/terrifying to be haunted by Dolly Dimples – a former carnival “fat lady” who lost 440 lbs and went on to author “Diet or Die: The Dolly Dimples Weight Reducing Plan” – whenever I am struggling on my own diet.  I think having her yelling in my ear to put down that slice of cake every once in a while would be… transformative.

Atomic Doll Productions Presents: Shocked and Amazed! is a one-night-only affair on August 5, 2017 at Bier Baron Tavern – 1523 22nd Street NW, in Washington DC. For tickets, purchase them online, or at the door.